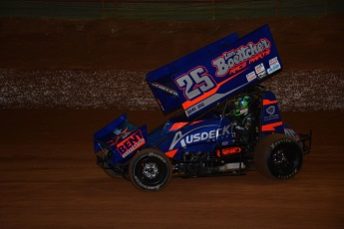 In a thrilling start to the 2017/2018 East Coast Logistics Sprintcar Track Championship at Ausdeck Patios Archerfield Speedway on Saturday night (September 16), it was Andrew Scheurele who emerged triumphant in the 30-lap feature race. Having started on the outside front row alongside pole qualifier and defending series champion Luke Oldfield, Scheuerle shot to the front early before being rounded up by a rampaging Lachlan McHugh, who subsequently looked on track to record a resounding win until a flat tyre ended his run and handed the lead back to Scheuerle. Although Oldfield narrowed the gap in the closing stages, he was never able to launch a concerted bid for the lead, finishing in second spot ahead of Mitchell Gee, with Peter lack and Callum Walker rounding out the top five.

In the opening round of the Polar Ice Midget Track Championship, it was Darren Vine who prevailed over a small field, leading home Adam Wallis and Michael Harders in the 20-lap showdown. Having led the opening laps, Mark George faded to finish fourth, with Scott Wilson snaring fifth spot.

A stout 29-car field fronted for the opening round of East Coast Logistics Sprintcar competition and it was no surprise to see Oldfield emerges with KRE Quick Time in qualifying, stopping the clock at 11.916 in a perfect start to his championship defence. Walker (12.024), Gee (12.069), Scheuerle (12.106) and Paul Rooks (12.107) were next quickest ahead of Dan Murray, Lack, Mark Pholi, McHugh and Brad Ayers.

The opening heat saw Andrew Liebke make a lightning start to lead the field, only to end his night in turn three on the opening lap when he whacked the wall and tipped over. Ben Hilder took control from the restart and finished first ahead of Lack and South Aussie visitor Glen Sutherland.

Stewart Craig enjoyed a winning return to racing in heat two when he downed David Whell and Pholi, with Michael Saller prevailing in heat three from Allan Woods and with McHugh.

Oldfield charged through the field to win heat four, with Woods second again ahead of Andrew Marks on this occasion. Brock Dean secured a place in the Dash when he prevailed in heat five in advance of Gee and Whell before Brett Minett took the final heat ahead of Lack and Rob Hamilton.

Emerging as top qualifier from the heats, Oldfield found some good fortune in the pre-race grid draw for the Dash when he selected pole position for the 6-lap shootout, taking full advantage to lead Scheuerele, Gee, McHugh, Walker, Lack, Dean and Murray to the chequer.

Mitch Gowland led from go to whoa to win the B Main over Minett and Hilder, with Sutherland grabbing the final transfer spot despite the best efforts of a fast-finishing Saller.

When the feature fired into action, Scheuerle shot to the front and held sway until McHugh made his move, the duo putting on a marvellous display of tit-for-tat lead-swapping slide jobs before McHugh skipped clear and seemed destined for victory lane before a tyre capitulation forced him to the infield. Back in control of proceedings, Scheurele powered forth to secure the early advantage in what seems certain to be another closely contested championship. Oldfield narrowed the gap over the final laps to ultimately finish half a second in arrears, with Gee more than five seconds clear of Lack in third spot. Behind Walker came Woods, Brent Kratzmann, Dean, Whell, Sutherland and Pholi, with Ayres, Hilder and Murray completing the finishers.

Midget heat winners were Vine, Wallis and Scott Farmer, but it was George who emerged as the pole qualifier for the feature, taking advantage to lead the opening laps. Vine surged to the front on lap three and was unstoppable from this point, charging to the chequer in impressive fashion. After a somewhat inauspicious start to the night, Wallis bounced back in a big way to pilot the Nielsen Motorsport #89 into second spot ahead of Harders, whose late decision to race proved prophetic. Having slipped to fifth at one stage, George fought back to fourth ahead of Wilson, Reid Mackay, Brad Young, Mitchell Rooke and Farmer.

Having won both of his qualifying heats, Williams was unstoppable in the Formula 500 feature event, clearing away to finish more than four seconds clear of Brown, who relegated Kennedy on lap seven. A big charge from Graham Williams carried him to fourth, with Piper Ogilvie completing a great night with a fifth-place result. Marshall Lewis, Adrian Farrell, Mitchell Whittaker, Royden Alcorn and Royce Harvey rounded out the top ten. A recent graduate from the Junior ranks, Nick Hodges collected a heat win but unfortunately failed to go the distance in the feature.

Compact Speedcar heat wins were shared between Emma Harris, Matt O’Neill and Trent Usher, but it was Collins who set the pace in the feature race to establish a sizeable lead that was jettisoned as a result of a late-race restart. Under plenty of pressure over the final two laps, Collins held firm to keep Usher and Harris at bay; less than a second separating the trio at the fall of the flag. Jim Kennedy finished fourth ahead of Wayne Corbett, Richard Treanor, Bernie Clarke, Dave Swan and Riki Harrison, who looked a potential placegetter before spinning, with Richard Rooke rounding out the field.