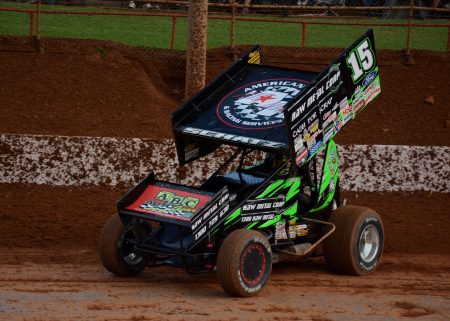 Is it really any surprise that the biggest field of the season thus far will descend upon Ausdeck Patios Archerfield Speedway on Wednesday night (December 26) for the annual Boxing Night Spectacular featuring World of Outlaws Sprintcar Series champion Donny Schatz? After all, any Sprintcar driver who takes their craft even remotely seriously will be relishing the opportunity to take on the world’s best driver at Queensland’s home of speedway. Arriving in Australia fresh from clinching a remarkable tenth WoO Championship, Schatz will face off against 38 other drivers on Wednesday and it is unlikely the North Dakota native will be satisfied with anything less than a feature race win in round seven of the East Coast Logistics Track Championship. In addition to 39 Sprintcars, Wednesday night action will also feature Monster Trucks, Fireworks and round five of the Polar Ice Midget Track Championship, plus Compact Speedcars and Modlites.

Whilst Schatz is the obvious favourite given his remarkable record of success at home and here in Australia, there will be plenty of local challengers who fancy their chances of springing an upset, with Luke Oldfield amongst the few who have upstaged Schatz in recent seasons. Following a dominant display at the previous round of the ECL Championship, Oldfield brings some outstanding form into the clash and he will receive strong support from the likes of Queensland champion Mitchell Gee and defending track champion Andrew Scheuerle in leading the local charge.

Others in the field who have produced some excellent performances so far throughout the season include Brent Kratzmann, Peter Lack, Allan Woods and Brent Aprile, with Kevin Titman also finding some form in recent weeks to suggest he might be a contender if he can find the consistent pace needed to be a regular front runner. There is a wealth of experience in the field and with every single driver looking to make their mark by upstaging the big guns, the intensity of the competition will be unprecedented as the rewards for success extend beyond a visit to victory lane. A win on Wednesday will be the perfect way to begin preparations for the big events to come, including the Titan Garages WSS Australian Open on January 4/5 and the Australian Sprintcar Championship on January 26/27.

Having struggled for numbers so far this season, Midget competitors have embraced the opportunity to feature on the Boxing Night show with 20 cars entered to contest the Danny Davidson Memorial. Former national champion Adam Clarke dominated the opening two rounds of the Polar Ice series with a win and a runner-up result respectively. However, with Clarke absent from the following two rounds, Rusty Whittaker and Darren Vine collected a feature race win apiece and Wednesday night will bring all three together for the ultimate battle for bragging rights in an event that carries plenty of prestige. Others to watch include Riki Harrison and Sydney’s Braydon Willmington, both of whom have featured on the podium this season, while the previous round demonstrated that Charlie Brown will also be a very strong contender who, regardless of his result, will be one of the most exciting drivers to watch given his love of the highline.

Modlites make their second appearance of the season and the absence of category top guns Klinton Hancey and Terry Leerentveld might just bring about the closest competition for some time with 28 drivers fired up to fill the void at the front of the field. Looking at the line-up, Sam Gollschewsky perhaps brings the best form into the contest, with the likes of Scott Lehfeldt, Nathan Politch, Neil Gregson and Chris Were looming as his biggest threats. Also amongst the starters in her rookie season of Modlite competition will be Junior Sedan graduate Abi Meehan, who will no doubt draw on the experience gained during her first ever Archerfield outing two weeks ago to continue her rise through the ranks.

An interesting nomination amongst the Compact Speedcar entries is former Sprintcar racer Cody Maroske, who will be piloting the #18 normally driven by Glenn Wright. Maroske will take on a field that includes the in-form Matt O’Neill, who has proven very hard to beat in recent weeks. Wayne Corbett, Emma Harris, Trent Usher, Dave Collins and Nick Gannon are others likely to make Maroske work very hard in his bid for success.

With Raptors Rampage and Convict throwing down some Monster Truck mayhem throughout the night and a huge Fireworks extravaganza also on the program, Boxing Night at Ausdeck Patios Archerfield Speedway will be a night to remember. Gates open at 4.00pm (with online ticketholders securing entry from 3.30pm), with early racing from 5.00pm. Sprintcar time trials are scheduled for 5.30pm and the main program will launch from 6.00pm.