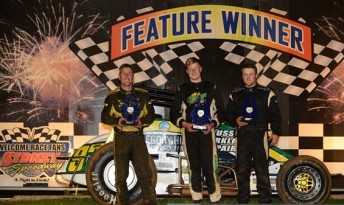 A big field of drivers contested the fourth round of the NSW Wingless Sprints Club Championship,
sponsored by Aussie Forklift Repairs and Fruitwheels Refrigerated Transport, but it was Daniel Sayre
who stood the tallest and survived what was a wild night of Wingless Sprints action.

Sayre led all 20 laps of the A-Main and right from the outset, set up a commanding lead that was
never challenged. Second to the line was Sayre’s team mate Damian Abbott in the second of the
Aussie Forklift Repairs cars and third to the line was last start A-Main winner, Dean Thomas.

Further back in the pack it was pretty willing.

The race was red flagged on lap 15 after Marshall Blyton made contact with Ashleigh Jack and flipped.

At the same time, Sean Mayo rode out a horrifying flip into turn one. Both drivers emerged A-OK.

Fourth to the finish line was Mark Blyton, who started from the eleventh position, fifth was Scot Rowe, Adam Hourigan was sixth and Jeff Thomas, Sean Dicker, Mikaela Blyton and Geoff Piekar rounded out the top ten.

Piekar did exceptionally well, coming from the 24th starting position.

The two non-finishers were Marshall Blyton and Mayo.

Don’t forget, you can keep up to date on all things happening via the Facebook page at
www.facebook.com/nswwingless.sprints.

The NSW Wingless Sprints would like to thank Fruitwheels Refrigerated Transport and Aussie Forklift
Repairs for their support of the 2014/15 Club Championship.