The annual Wally Anskaitis Cup at Avalon Raceway for the Victorian Grand Prix Midget Club has been run with an eventful finish being decided by race stewards after cars left the race track re-instating Janelle Saville to the lead position she was in at the finish and the initial winner out of the results. 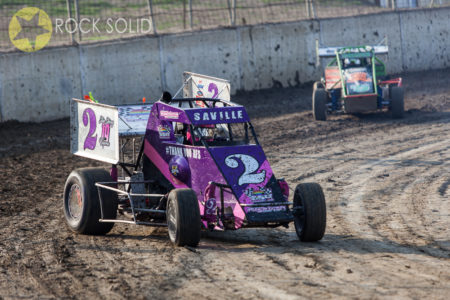 Two heat races in the Ballistics Performance Parts Masters Series event drew all race drivers in each heat, a possible thirteen cars. The Wally Anskaitis Cup quickly being established as one of the top events in the class and a sought-after win for all.

Fowler could not take advantage of his pole position start as his car pushed high in the turn. Contact between he and Trev Perry (#55 WRT Wings – Suzuki) and then contact from Paul Perry with nowhere to go jumping over his left rear, ended Paul’s race and left Fowler at the rear. Fowler (#13 The WOW Facta – Yamaha) advised the media that he was the cause of the contact as he hit a wet patch on the track and washed high and the local Geelong racer dropped to the rear after the contact.

Myers (#11 Automotive Super Balance – Suzuki) assumed the race lead from Trevor Perry, Crawford, Denning and Carr on the first lap. Lap one was all that Denning could complete as he exited the race as his chain that rotates the machine came off. Perry moved ahead on lap two from Myers, Crawford, Carr (#3 MowPro – Suzuki) and Blackeby. Myers moved back in front on lap four and was never headed as he led Perry, Crawford, Carr, Saville, Blackeby, Buis (#5 Rock Solid Productions – Yamaha), Fowler and Brown (# 1 Stop Property Services – Suzuki) to the finish.

Reversing the field in heat two, Saville (# 2 Highline Racewear – Kawasaki) began from the front with Carr, Brown, Blackeby, Crawford, Paul Perry, Trevor Perry, Myers, Florrimell and Fowler. Denning and Stanley did not start. Saville and the Perry boys made late decisions to join the field at Avalon after torrential rain cancelled New South Wales race meetings made the most of the pole position start in the second heat when she led the field from start to finish. She led Carr, Blackeby (#10 Spitfire Restaurant & Grill – Yamaha), Buis and Crawford on lap one.

Carr a rookie this season has quickly settled into Grand Prix Midget racing and held second for most of the race. On lap six, Trev Perry moved to second spot and at the end of eight laps Saville won from Perry, Carr, Blackeby, Florrimell (# 81 TM Lineboring – Suzuki), Crawford, Fowler, Meyers, Paul Perry and Brown.

Denning dropped a chain for a second race in succession whilst Luke Stanley (#78 JF Racing – Suzuki) did not start due to a broken accelerator cable.

In a Perry Brothers built race car, Saville led lap one from the builder Trev Perry, Carr, Crawford and Myers. Flying through the field Fowler who began in seventh was third by lap three and second by lap four as he and Crawford passed Trev Perry. Carr spun out of race contention early after his great qualifying efforts.

Fowler had past Perry and then Saville on lap four however Blackeby spun and the restart moved Saville back into her lead spot.

On lap eleven and with curfew at the venue putting pressure on the management of the night, contact involving Trev Perry in second and Saville in first seen the latter crossing the line last after spinning out of the lead and Perry being called the winner of the race ahead of Fowler, Florrimell, Crawford, Myers, Paul Perry (#33 Perry Bros Chassis – Suzuki), Buis, Denning, Blackeby, Brown and Saville.

After a protest was raised by Saville with stewards, the decision of the race win was given to Saville based on her position at the time of contact. Saville, Fowler and Florrimell went to the presentation podium. However, at the time of this press release the final standings are pending a review which will be made in the coming week.