Saville leaves Wangaratta with a small piece of redemption

Saville leaves Wangaratta with a small piece of redemption 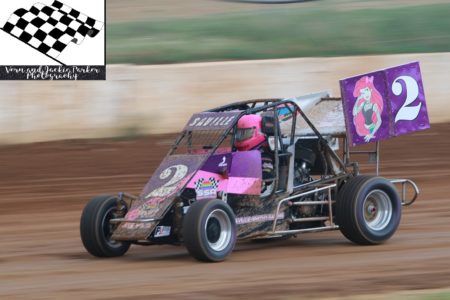 The Victorian Grand Prix Midget Racing Association returned to Wangaratta City Raceway for the second time in two weeks when a planned meeting at another venue was cancelled on the Monday. With a very strong friendship between the VGPMRA and the Wangaratta club, both got talking and agreed to organise the change of racing to Wangaratta and now the rest is history as Janelle Saville form New South Wales left as the winner.

Many of the drivers from the recent Victorian title race meeting returned and some amongst them hoping for a much better nights racing such as Saville after her heartbreaking accelerator cable breakage as the field readied to start the title race.

Carr led Booker and Saville on lap one of ten. After extensive rear of car damage at the Victorian title to the Stinger driven by Booker, he moved into the teams other car which proved to be super strong as Booker (#50 Yamaha R1 – HMJ – R & P Stainer Grinding Service) took the race lead on lap two. Saville moved into second on lap three; however she could not orchestrate a pass on Booker who led all the way to win from Saville, Shawn Ward, Fowler, Carr, Bacon, Kamolins, Blackeby and Brown. Goss (#33 – Kawasaki ZX12 – PBR – GB Powder Coating) dropped a chain half way through the race and failed to finish.

Blackeby last season’s B Grade champion led lap one from Bacon, Booker, Fowler and Saville. However Saville was just winding up as she swiftly moved to second by lap two. She took command of the race lead from lap four and Blackeby held on to second for the next few laps before Booker passed him. Saville went on to win from Booker, Blackeby, Goss, Kamolins (#22 – Independent – Suzuki GSXR 1100 – Kamolins Wise Investments), Jack Ward, Bacon and Shawn Ward. Brown due to oil pressure and Fowler due to electrical and chain issues pulled out of the race on lap seven.

The third and final heat race to decide the qualifying order of the final for the evening was drawn with Saville on pole from Florrimell, Shawn Ward, Booker, Bacon (#36 – Yamaha R1 – PBR – DB Cleaning & Kanga Hire), Brown, Blackeby, Jack Ward, Kamolins, Goss and Fowler who was put to the rear after initially withdrawing from the heat only to find the electrical issue with the car in time.

Florrimell’s horrid night continued as he dropped a chain on lap one as the green flag dropped, which caused the rest of the field to scatter as Booker climbed over the top of Florrimell almost putting the V50 upside down. Saville led Shawn Ward, Bacon, Booker who recovered on all 4 wheels and Blackeby. Booker and Goss moved forward on lap three into third and fourth. It took until lap eight before Booker could pass Shawn Ward (#44 – Suzuki GSXR 1100 – Independent – Benalla Paint Place) into second, however too late to catch Saville who won from Booker, Shawn Ward, Fowler, Goss, Kamolins, Blackeby, Jack Ward, Bacon and Brown (#88 – Yamaha R1 – Stinger – 1 Stop Property Service).

Feature time and the field was sorted with a reverse order top six and the three rookies at the rear of the field. This meant Brown and Fowler (#13 – Yamaha R1 – HMJ – J & D Price Automotive) began at the front with Blackeby, Shawn Ward, Booker and top qualifier Saville (#2 – Kawasaki ZX12 – PBR – JAM Signs) in the top six spots then Jack Ward, Kamolins and Goss.

Everybody was keen and it was evident when on a start attempt Goss and Jack Ward at the back of the field came together finishing with Ward and Goss hitting the concrete fence and Goss not being able to restart due to engine issues.

Fowler led the first lap from Saville and Shawn Ward then Booker and Blackeby (#10 – Yamaha R1 – Stinger – Pitstop Mowers). Shawn Ward kicked up a gear on lap two taking second only for Saville to snatch that right back. Fowler led until lap four where Saville passed him, only for the caution to come out when Kamolins parked it on turn two.

On the restart Fowler held the lead until turn three when Saville made her move again and Booker passed Shawn Ward into third. On lap ten Shawn Ward’s car came to a halt with battery issues and Saville continued on to the finish on lap fifteen picking up a win from Fowler, Booker and Blackeby.