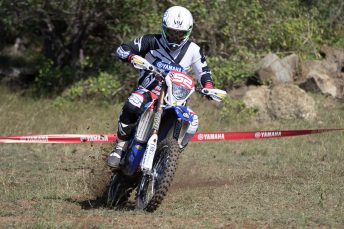 Yamaha mounted rider Riley Graham is ready to hit the track for his home race at Rounds 7 & 8 (June 24-25) of the Yamaha Australian Off-Road Championship (AORC) in Renmark, South Australia (SA). After an eye-catching performance back at Miva, Queensland (QLD), the SA local will be looking to solidify his current third position in the E2 class standings.

“I’m really looking forward to racing in front of my home crowd at Renmark,” Graham said. “The sandy and dusty terrain should suit my style perfectly. I also have plenty of family coming to the track for the weekend, including my parents, older brother and my fiancé of course!

“I haven’t raced at Renmark for several years and I’ve only competed on the Motocross track there. It will be great to race on the enduro tracks for the first time! Renmark won’t be as technical as the previous tracks we’ve raced at with Miva (QLD) and Rawson (VIC), with more open and fast and flowing sections to be expected.”

Graham is one of the ‘in-form’ riders of the Yamaha AORC, with his step up to the E2 class this year, after several seasons in the E1 division. Graham has gelled extremely well with a larger capacity machine and each weekend sees an improvement in his racing with two third place finishes at Miva.

“Obviously with my size, I’m a much better fit on a WR450F and hopefully the change in class will reap improved results,” Graham stated. “I did enjoy my time in E1 and learnt a lot, however I think I can really shine on the larger bike. You can ride the machine in a higher gear and not rev it as much. I also prefer the smoothness that the engine provides.”

The E2 class is arguably the most talent studded in the championship, and include superstars such as KTM Enduro Team’s Daniel Milner and Active8 Yamaha Yamalube Racing Team’s Josh Green. When asked if Graham believed he could compete for the win with these two accomplished riders, he responded; “Anything’s possible really, however Milner and ‘Greeny’ are the benchmark. Everyone’s chasing those two, and a lot has to go right to challenge those two when they’re on form. I would like to get more track time in preparation for Yamaha AORC rounds to take the fight to those guys but my work schedule is quite hectic. Milner and ‘Greeny’ are always firing on all cylinders as soon as the racing starts. It can take about half a day to find my rhythm on the track.

“I’ve won the first two rounds of the South Australian (SA) Off-Road Championship,” Graham stated. “Its great to win against guys like Andy Wilksch, Lyndon Snodgrass and Ivan Long, who have spent stints in the championship this year. I’m hoping to transition that form into the Renmark round.”

Graham discussed his career highlights so far; “Last year was a big highlight for me with third in the E1 class. Tenth last year at the Australian Four Day Enduro (A4DE) was also a great result, considering the competition with all the top Australian talent; Daniel Milner, Matty Phillips and Josh Green plus internationals such as Matthias Bellino (France). With a field as talent packed as that, a top ten finish was a real highlight.”