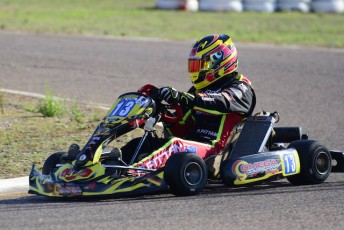 MEDIA RELEASE: South Australia’s best kart racers will face the ultimate test this weekend when the Australian Kart Championship presented by Jayco and Castrol EDGE heads to the Festival State.

More than 200 competitors will line up in the prestigious event at the Monarto Karting Complex, just outside of Murray Bridge, that marks the halfway point in the 2016 Championship.

Reigning South Australian Champion Paul Pittam will lead the charge for the local drivers competing in both the TaG 125 and high-performance KA1 class.

Pittam is one of only five South Australians to have won a round of the elite Championship having tasted success in 2005. It was in that event that the 27 year-old One Tree Hill resident led home the now Red Bull Formula One driver Daniel Ricciardo.

“When the Championship comes to South Australia it’s always a huge buzz and I can’t wait to get out there and test myself against the best drivers in the country,” said Pittam.

“I’ve been racing karts since I was ten years old and it’s been a great sport to be involved with. It has provided me with so many opportunities. Last year I raced in France for the first time, which was a great experience.

“Every time you race it’s a real buzz, even better when you can win by beating the best opposition there is going around. I don’t have the funds or time to be able to do the Championship full-time so my focus is on trying to win my home round and show that us South Aussies can do it as good as anyone else.”

Glandore’s Jonathon Mangos is expected to be one of the front-runners in the six-speed KZ2 class.

The Tom Williamson Motorsport driver qualified on the front row during February’s opening round of the Championship in Dubbo and should be a podium contender on his home track this weekend.

Five other South Australians will join Mangos on the KZ2 grid – the fastest class in Australian karting – including Luke and Lee Glandore’s Jonathon Mangos (#44) will line up in the KZ2 class.

Dillon who are better known for their Championship success in the Speedway circles.

Purdie finished on the podium at the season opener in Dubbo and is currently fifth in the standings entering this weekend.

There will be a total of nine classes being contested, with the youngest lining up in the Cadet 9 class for drivers aged between 7 and 9 years old.

Practice for the event begins on Friday with qualifying and the heat races held on Saturday. The Finals will be contested on Sunday afternoon.

The Monarto Karting Complex is located on the Old Princess Highway, Monarto.

Entry is free for spectators.