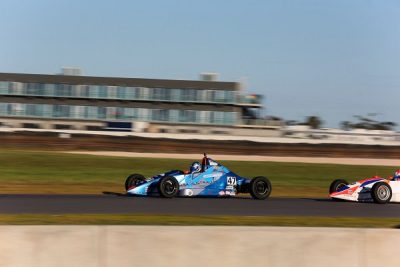 Tom Sargent’s confidence has been boosted by his second-place finish at Tailem Bend pic: Insyde Media

16-year-old Formula Ford driver Tom Sargent says he’s full of confidence ahead of this weekend’s fourth round of the NSW Formula Ford Championship at Wakefield Park in Goulburn.

Sargent, who finished second in the national series round at Tailem Bend a fortnight ago, says while it was exciting to finish on the podium against the top Formula Ford drivers in the country, he’s still focused on doing the best he can in the state championship.

“Tailem Bend was a massive confidence boost for us, I now know I have the speed to compete against the very best drivers in the field,” Sargent said.

“But I’m still wanting to do the best I can in the state championship. The field at Wakefield this weekend is not as big as it has been at the national rounds, but there are still some good drivers entered, especially Cameron Shields, Nathan Herne and my team-mate Lachlan Mineeff. I’m looking forward to some good battles with them.

“Heading into this weekend, I’m fifth in the state series points but there’s a chance to move up a few places if we have a good weekend.”

Rain is forecast this weekend, and Sargent said it will be a good opportunity to practice wet-weather techniques.

“I haven’t driven the Formula Ford in the wet much at all, so in some respects some rain this weekend would be a good thing – it will allow me to gain some experience of driving in a low-grip environment, and as a team it will allow us to learn how to set the car up for a wet track.”

The weekend will consist of qualifying and Race 1 on Saturday, followed by Races 2 and 3 on Sunday.