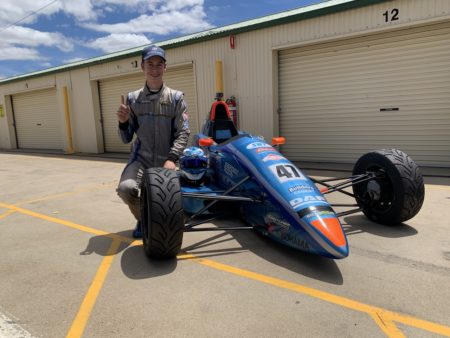 There were some nervous moments for Tom Sargent in the third and final round of the NSW Formula Ford Championship at Wakefield Park on the weekend, but the Young driver conquered the challenges and won his first car racing championship.

After qualifying on pole position, Sargent slotted into second place at the start of Race 1, a position he held through to the finish.

“Unfortunately the start didn’t go according to plan and I lost the lead by the first corner. I had good speed, but at Wakefield Park it’s hard to overtake and I wasn’t able to find a way past the leader,” Sargent said.

In Race 2, Sargent fought his way into the lead but upon completing the overtaking manoeuvre, his car was struck from behind by his rival, sending him off the track and causing severe damage to one of his rear tyres.

While Sargent was able to soldier on for a few laps, the tyre damage ultimately became too severe and he was forced to make a pit stop for a replacement tyre. Sargent’s CHE Racing crew completed a rapid tyre change and although he was in last position when he returned to the track, he was able to set the fastest lap of the race, securing a vital bonus point in the process.

That point proved crucial, because it gave Sargent an unassailable buffer over his opponents with one race remaining.

“When the contact happened, my immediate focus turned from winning the race to just making sure I finished,” Sargent said. “Even if you come last, you still score some points, but if you don’t finish, you get zero.

“The decision to make a pit stop for the tyre change proved to be the right one, because I was able to set the fastest lap and score the bonus point, which made all the difference.”

With the championship in the bag, Sargent was still determined to make up as many positions as possible in the final race; he finished fourth after starting at the rear of the field.

“The last race was an eventful one; there were a few incidents in front of me that I had to dodge,” Sargent said.

“I got up to third, but I had to work the car very hard to get into that position. The engine became hot and started losing power and the tyres were overheating as well.

“Ultimately, I finished fourth which was still a good result considering where we started.”

Sargent was thrilled to win his first car racing title.

“While we weren’t able to race in the national series this year, the state championship was still very competitive and I was up against some talented drivers,” Sargent said.

“To win the championship is a credit to my CHE Racing Team, who provided me with a fast car at every round.

“I’d also like to congratulate my team-mate Noah Sands, who won the round on the weekend; he’s still very new to Formula Ford but he’s already driving really well,” Sargent concluded.