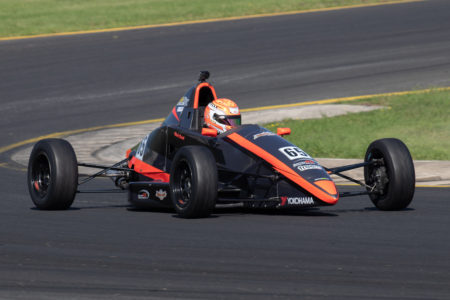 Noah Sands returns to Wakefield Park this weekend for round two of the Australian Formula Ford Championship, for the first time since he took his first car racing round win at the circuit in 2020.

Sands claimed two wins in the final NSW Formula Ford Championship round in 2020 at the Wakefield Park circuit, propelling him to the overall round win.

In the opening round of the 2021 national season at Sydney Motorsport Park, Sands qualified second, but suffered a setback when he was taken out of race one while running in a strong position.

Sands’ scintillating drives through the field saw him recovering to finish fifth for the round, boosting his confidence ahead of Wakefield Park this weekend.

“I’m feeling really strong, the preparation from myself and the team has been really intense for this round. We’re looking to carry that pace from Sydney Motorsport Park and turn it into some podium results,” said Sands.

“The opening round of the year was positive, especially our qualifying one-two with Tom (Sargent), which was a great reward for our CHE Racing crew.

“Last time I was at Wakefield was sensational, not only grabbing two race wins but the round win as well. It gives me a little boost of extra confidence heading back, knowing that I can get the job done.

“It’s a long season, but we want to maximise our potential early on to avoid chasing points late in the year,,” concluded Sands.

Round two of the Australian Formula Ford Championship takes places at Wakefield Park from May 21-23 as part of the Motorsport Australia NSW State Championship race meeting.