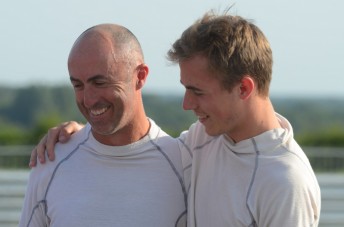 A couple of weeks ago, I was offered one of those opportunities in life you just don’t pass up – the chance to race a sportscar for the first time in my career in the Radical SR3 Challenge at Snetterton with none other than my dad, David Brabham as my teammate.

It was a daunting prospect that turned out to be an amazing experience, not only to drive the Radical SR3 RS but also to work with dad. To finish on the podium on our first ever race together was a very special moment.

Two years ago I was still karting, I moved up to British Formula Ford last year and raced in the MRF Challenge, so stepping into a sportscar was a big learning curve.

I had to get to terms with how the SR3 RS handled with more downforce and weight but less power and different gears to what I am used to. I was pleased that I got the hang of it all quite quickly to match dad’s times.

We’d only planned to do the SR3 Challenge but Radical invited me to do the Clubman’s Cup races as well and I jumped at the chance. It was a really good experience and pretty cool to qualify third and finish fifth against some really quick guys.

I didn’t know what to expect driving with dad for the first time, as I’d never done anything like it before and, let’s face it, he’s given me pretty big shoes to fill! But I was looking forward to it and just wanted to do a good job.

The fact that dad hadn’t driven a Radical before either made it even more interesting. They are impressive cars that take a bit of getting used to and we were up against some quick and experienced drivers. You can’t just hop in and be mega quick, but dad and I worked well together

to improve our pace.

It was really helpful to be able to explain to dad what I was feeling from the car and get the same feedback.

That relationship built and built over the weekend and it was such a rewarding experience to go through that process and end up top three against seasoned Radical racers like Bradley Ellis, Scott Malvern, Phil Keen and Lewis Plato. David Brabham at work in the Radical

I know most young drivers would give a lot to have David Brabham coach and guide them through a race weekend while driving with them, so I’ve been very fortunate to have that opportunity.

I learnt a lot about myself; how I can improve my mental preparation before the race, as I’m getting in the car and in different situations. I’ve also taken away a few new techniques I’ll be able to use and adapt to Formula Ford or wherever I race next.

I’d like to say a big thank you to all the Radical guys and hope to work with them again. Everyone from the mechanics and co-founder Phil Abbott, to all the other drivers were just really supportive and made for a really enjoyable weekend.

Who knows what the future holds, but I wouldn’t hesitate to do it all again.

Dad’s had so much experience across the sportscar categories and being able to do something like that appeals to me quite a lot.

I’d love to race with dad again soon and perhaps even work towards something like Le Mans.

It’s almost got to be done!