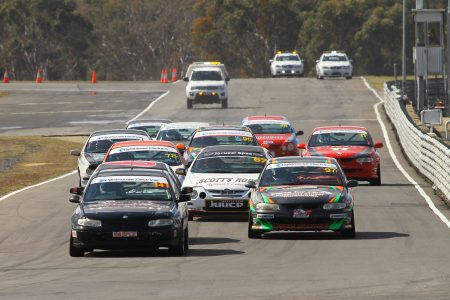 The 2018 Lighthouse Electrical Queensland Saloon Car Series reaches its climax this weekend as Warwick’s Morgan Park Raceway plays host to the sixth and final round of the series held at the CAMS Queensland Circuit Racing State Championship.

Both the overall Queensland Saloon Car Series and the CAMS state championship are up for grabs this weekend, with hometown Warwick drivers leading both classes heading into the final round.

Meanwhile, the four-round CAMS championship is lead by Beggs with a 56 point lead over Gympie racer Shayne Hine (Ford AU Falcon) and Furness closely behind in third.

Furness will be gunning for his maiden Saloon Cars title this weekend, while Beggs already has a previous CAMS and club championship to his name in 2014 and 2016 respectively.

With six wins, Beggs also leads the tally for most race wins this season over Furness’ four wins including the enduro cup clean-sweep, followed by Hine with three wins and Carter with one.

Hot on their heels has been Concept Tiles Racing’s Brock Mitchell (Ford AU Falcon) who’s accrued one fastest lap this season and managed third outright at the penultimate round of the series in September.