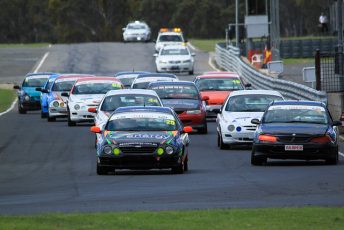 The Queensland Saloon Car Series returns to Morgan Park for round two of the 2017 series on September 2-3, with a host of new and returning names set to hit the track.

With two wins and a second, Saloon Car debutant Jamie Furness won the opening round at Queensland Raceway, and the Warwick local will be looking for more of the same this time out.

“I’m looking forward to it, being my home track, but it’s going to be a tough weekend,” said Furness.

“Lindsay [Kearns] had good speed at the last round and I was fortunate to win the last race after his drama.”

The former HQ Holden Series champion will be kept busy with double duties across the weekend, with racing planned in both the Saloon Cars and the HQ Holdens.

“It’s going to be hard jumping out of one into the other but i’m really looking forward to it.”

“The power in the HQ is nowhere near as much as the Saloon Car, but the characteristics of how to move the car around and to carry the momentum through the corners i’ve found so far to be very similar.”

A new name to the grid will see Gympie driver Cameron Klee make his Saloon Car debut in the ex-Craig Campbell Holden Commodore.

“Saloon Cars is something I can race occasionally and enjoy it. It’s a good, controlled category which keeps all the cars at an even pace,” said Klee.

“I’ve crewed for many teams and categories before, but as a driver I haven’t done much myself.

“My main goal is to complete the weekend with no damage or mechanical problems, and to put it back on the trailer in one piece.”

After suffering major damage to his Falcon following an incident at the Australian Production Cars round at Queensland Raceway, Gold Coaster Brad Carr returns to Saloon Cars competition in an ex-Jarvis Family AU Falcon. He will be joined by fellow Falcon racers Shane O’Brien and Luke Andersen who return to the category this weekend.

11 cars are set to do battle, as the Queensland Saloon Car Series hits the track at Morgan Park Raceway with practice on Friday, and racing to follow on Saturday and Sunday at the CAMS Queensland State Championships.