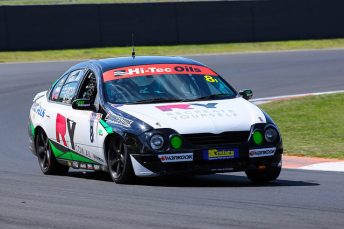 This weekend’s round four of the 2017 APC season – being held at Queensland Raceway across August 4-6 – will host two Saloon Cars amongst its ranks.

Carr is enjoying only his second year in motorsport with the Queensland Saloon Car Series and has also undertaken enduro events such as the QR 300 (2nd in class in 2017) and the 2017 Hi-Tec Oils Bathurst 6 Hour (doubled as round one of the 2017 APC, fourth in class).

Carr will be joined by two-time Queensland Saloon Car champion Coleby Cowham in the #8, which is supported by Ry.com.au, Escape Energy and Tyre Plus Burleigh Heads.

“Coleby is not only the two-time Queensland Saloon Car champ but he also has a class win at the 2016 Bathurst 6 Hour and a class podium at the 2017 Bathurst 12 Hour, and is just an all-round nice guy,” Carr said.

“I am really looking forward to seeing what we can do in Class I at Queensland Raceway for the APC this weekend.”

The #67 Juuce/Scott’s Rods Ford Falcon AU Saloon Car will be driven by Kearns and Scott Green.

“Scott is a long-time sponsor of Lindsay and this weekend will not only be his first ever APC event, but his first CAMS-level event of any kind.

“Both entries should be strong this weekend with a good mix of experience and enthusiasm, and I can’t wait to see what we can achieve together.”

The #67 is supported on-track by Juuce for Thirsty Hair, Scott’s Rods Performance Exhausts and Tyre Plus Burleigh.

The two Saloon Cars will be part of a 25-plus field of cars taking part in round four of the 2017 APC at Queensland Raceway across August 4-6, with the event to feature two x 300km races, including the infamous ‘Fight in the Night’ under lights race on Saturday evening. Spectator access on Friday is free, and only $20 for Saturday or #30 for Sunday admission – a weekend pass is also available for $40.00. All of Sunday’s action will be streamed online live and free via thenationals.com.au