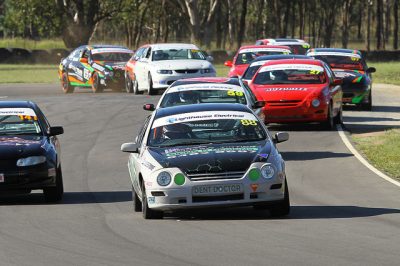 After a successful start to the 2018 season, the Lighthouse Electrical Queensland Saloon Car Series returns to Morgan Park Raceway for round 2 of their championship.

Gympie racer Shayne Hine leads the series after he scored his maiden race and round victory with a clean sweep of all three races at round one in March, and the Ford AU Falcon driver will be looking for more of the same this time around at the Warwick circuit.

Carter secured the first pole position of the year by four tenths of a second, and showed competitive speed across the weekend had it not been for a couple of tyre failures that damaged his chances in race one.

Beggs challenged for race victories in all three races, and the 2014 champion is hungry for more and hopes to convert his strong pace into race wins this time around.

Three-time Queensland Saloon Car champion Lindsay Kearns returns to the grid after missing the opening round, and will be looking for a strong result off the back of a second place finish in the B2 class of the Bathurst 6 Hour over the Easter weekend alongside Saloon Car compatriot Brad Carr.

Hine (91 points) current holds a 15 point lead over Beggs (76 points), with Furness (62 points) a further 14 points behind, with the Saloon Cars set to do battle over four races over the weekend at round two of the CAMS Queensland Motor Racing Championships.