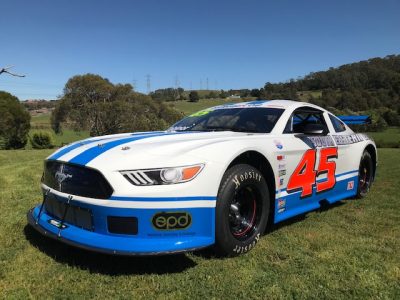 Two-time Australian Saloon Car Champion Simon Tabinor will contest the final round of the 2018 Performax TA2 Muscle Car Series at Sydney Motorsport Park ahead of a full-season campaign in 2019.

The Victorian racer will make his debut at the seventh and final round of this year’s series in what represents a return to national-level competition after stints in HQ Holdens, Saloon Cars and the Kumho V8 Touring Car Series.

The expat Brit first observed the series at the opening round at Winton before committing to enter with the Mustang.

“I saw the series at their first round at Winton and what impressed me most was how the cars are so well built, they’re proper race cars and everyone has the same equipment,” said Tabinor.

“I’ve won a couple of nationals championships, Victorian titles and races in England but after a while all you want to do is go to the track, race your car and enjoy yourself without requiring a rocket scientist to set it up.

“The cars are awesome, the parity is ace and the people are fantastic. They could not have been more welcoming and everyone is so enthusiastic about the series.”

Tabinor experienced the Mustang for the first time at a test outing last month at Winton.

“They’ve got heaps of power, they stop well, they turn well and the handling was fantastic because they’ve got a locking diff, so the car points really well.

“It’s not like a Supercar where they’re snappy and trying to fire you off the track. If a Supercar isn’t in their perfect setup window then they aren’t great to drive.

“The TA2 car is so easy to drive and you can drive around the setup. If the car’s not doing something at a certain corner than you can easily change your entry or your braking.”

Heading to the season finale at Sydney Motorsport Park, Tabinor aims for a trouble-free weekend to further the development of the car leading into the 2019 series.

“If we can bring the car back straight without any issues that’s the main thing, but we’ll see how we go in practice and qualifying and go from there.”

“We’re certainly not expecting anything at this stage, but we’ll race as hard as we can at every round and if we’re good enough than we’re good enough, if not then we’ll have to get better!”

Tabinor joins a host of new cars and drivers with a record grid set for the series finale, with further details including a full entry list to be revealed shortly.

Lighthouse Electrical Chevrolet Camaro driver Ashley Jarvis holds a 16-point lead in the Performax Cup standings from the RoadBees Transport Mustang of Russell Wright, with the McAlister Motors/Performax Mustang of Hugh McAlister a further 19 points adrift with one round remaining.

The final round of the Performax TA2 Muscle Car Series will be held at Sydney Motorsport Park on October 26-28, featuring at the penultimate event of the Australian Motor Racing Series.