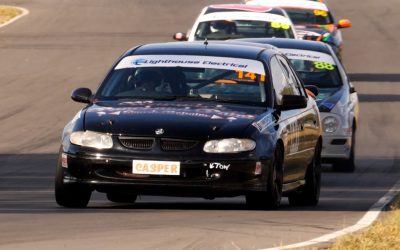 The battle for the 2018 Lighthouse Electrical Queensland Saloon Car Series title will heat up this weekend, as Warwick’s Morgan Park Raceway plays host to round five of the series held at the CAMS Queensland Circuit Racing State Championship.

The series returns to the sprint format for the penultimate round of the club and CAMS championship, after the inaugural running of the Mal Wood Automotive Enduro Cup saw overall series leader Jamie Furness and Tasmanian HQ Holden racer Bradley Wickham crowned champions.

The duo clean swept the three Enduro Cup races over the two rounds, including the ‘Fight in the Night,’ 300km endurance race race contested as part of the Australian Production Car Series at the Shannons Nationals meeting.

The trio will be joined on the grid by three time series champion Lindsay Kearns, round one winner Shayne Hine, Tony Shanks, Gerard Miscamble, Brock Mitchell and Jimmy Manteuful.

The Saloon Cars are set to do battle over four races over the weekend to decide round five of the 2018 Lighthouse Electrical Queensland Saloon Car Series.