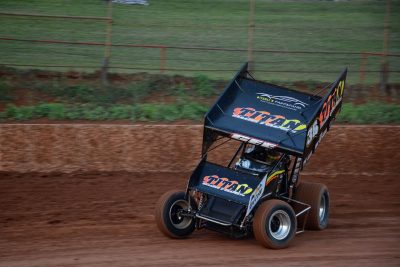 Here we go again! It is action central at Ausdeck Patios Archerfield Speedway this Saturday night (April 28) when Sprintcars return with 30 competitors to carve up the clay in round 14 of the East Coast Logistics Track Championship. With the battle for the track title edging closer to a thrilling conclusion and the Queensland Championship just one week away, drivers will be primed to perpetuate peak performance in Saturday night’s 30-lap feature race. Also featuring on the program will be round 11 of the Ian Boettcher Race Parts Wingless Sprint Club Championship plus Compact Speedcars, Modlites, Formula 500 Juniors and Ford vs Holden vs Sigma sedans.

At the previous round two weeks ago, the track championship contenders were upstaged by Sydney’s Michael Saller, who blasted from the outside front row to lead every lap and score his maiden feature race victory. Needless to say, Saller returns this weekend in a bid to replicate his success and again leave the likes of Andrew Scheuerle, Mitchell Gee, Luke Oldfield and Lachlan McHugh flailing in his wake. It is Scheuerle who currently leads the track championship chase and it was McHugh who took the challenge to Saller in round 13 and pinched the lead momentarily on a couple of occasions before spinning, but it was Gee who ultimately emerged as the best of the locals in finishing second, the same position he currently occupies in the championship standings. Oldfield, the defending track titleholder, saw his bid for back-to-back titles suffer a setback when he also spun in his pursuit of the race lead although, unlike McHugh, he was able to restart and salvaged an 8th-place finish to maintain third in the series.

Other strong runners at the previous round who are back in action again this week include Bryan Mann, Cody Maroske, Jayden Peacock, Mick Sauer, Randy Morgan and Dan Murray, who upstaged all of the above to top qualifying before failing to capitalise with a 13th-place result in the main event. Joining the field this week is former national champion Robbie Farr, who found himself unable to navigate a path to victory lane during the recent Easter Triple Challenge and will no doubt be determined to deliver a dominant display, with South Australia’s Ryan Jones also making the trek north to extend his season in the sunshine state. Of course, with another 15+ drivers in the mix, including several making the step up from the Development Series, there are myriad potential permutations that could unfold in their collective quest for success.

After a country sojourn last weekend, Compact Speedcars return home with a 16-car field and are expected to again produce the close racing that they have delivered on most occasions so far this season. The experience and accumulated success of Robbie Stewart and Wayne Corbett makes them the drivers to beat, with the likes of Trent Usher, Emma Harris, Dave Collins, Glenn Wright and Matt O’Neill expected to feature in any fight for a place on the podium.

Wingless Sprint numbers have continued to improve as the season has progressed and they have gathered perhaps their strongest field with 15 competitors nominated to compete. Brant Chandler has been the standout performer thus far and it is hard to imagine that he won’t be at the forefront of the feature race action once again. On form, Cody O’Connell seems to be Chandler’s likeliest threat, while Brad Keiler, Josh Dreaver, Paul Robinson and Brian Dixon also loom as podium contenders.

After struggling to find his mojo for much of the season, Terry Leerentveld recently clocked his 40th feature race win in Modlite competition – twice as many as anybody else – and his battle with Australian Champion Klinton Hancey (who is also the current Queensland, New South Wales and South Australian champion) is an expected highlight of the Modlite action this weekend. The 14-car field also includes former state champ Will Butler and an in-form Sam Gollschewsky who picked up a feature win in Lismore recently and finished second behind Leerentveld in Toowoomba last weekend.

The trusty Ford vs Holden vs Sigma sedans and the future stars of the Formula 500 Juniors complete another blockbuster program, which gets underway with early racing from 5.00pm. Sprintcars hit the track for time trials from 5.30pm and the main program is scheduled to kick off at 6.00pm.