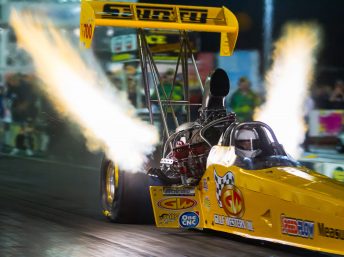 Australians are known for their ingenuity across all walks of life, but in the high speed world of drag racing there is one family that stands out.

Sydney’s Sainty family have built their own Top Fuel dragster, capable of burning the nitromethane required to produce 10,000 horsepower and accelerate to speeds of up to 500kmh in just five seconds.

Terry Sainty is the driver and he, together with father Stan and uncle Norm, designed and built their own unique Top Fuel motor in the nineties. Made from billet aluminium and with a unique three valve design, they have been one of the legendary teams of Top Fuel ever since, and this year at Nitro Up North they will make their first ever foray into Darwin’s Hidden Valley Drag Strip.

“We hear everyone up there is hungry for some nitro so we will be doing our best to let everyone have an up close look at the car,” Terry said.

“I’ve never been to Darwin before, what I know is from a little bit of World War II history. But we know how friendly people are up there and while we haven’t planned any holidays just yet, we might go and see some big crocodiles.”

The Sainty team has been one of the in-form performers in recent rounds of the 400 Thunder Drag Racing Series, which sees its first round of the 2017-18 season held at Nitro Up North. Terry credited the input of experienced nitro tuner Dwayne Reilly with helping to uncover a few secrets of the motor.

“Dwayne has been helping us with the tune up, we have changed the camshaft timing and got fussier with the settings in general. More fuel volume and clutch and getting a good baseline tune up,” Terry said.

That ‘good baseline’ has seen Sainty descend into the coveted four second zones at both Sydney Dragway and Willowbank Raceway recently and Hidden Valley is next on the radar – with the team perhaps even chasing their first 300mph (482kmh) run.

“We’ve made some more changes since the Winternationals two weeks ago with more fuel volume in the middle of the track where we have been hurting the motor in the past. I just need to make sure I am ready to hang on and keep it in the groove!

“We will be out there to do our best for Gulf Western Oil, Speedflow and Eagle Leads and we are slowly catching up to our opponents with this Aussie built motor.”

Sainty will be taking on Lamattina Top Fuel Racing’s Kelly Bettes (Qld), who is testing in Queensland this weekend to get in form, Premiair Racing’s Peter Xiberras (NSW) and the ‘Nitro Madman’ Mark Sheehan (WA) at Nitro Up North, which takes place from July 21 to 22. The event also features rounds of Pro Slammer and Top Bike, plus the opening round of the Summit Sportsman Series.

Spectator tickets are now available online from just $25 and entries are still open for racers.