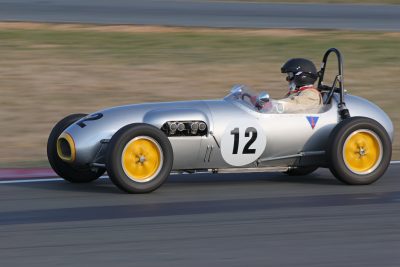 The Sabakat started its life as a 1957 Lotus 12 before being spirited to Australia in the fuselage of a plane pic: nzpeterb Flickr

It was disguised under the name Sabakat and around 60 years ago had a decidedly racy history, but now one of the first Lotus competition cars is returning home to the Darling Downs for its debut in the Historic Leyburn Sprints next month.

The appearance of the 1957 single-seater among more than 200 historic, classic and performance cars entered for the 23rd annual Sprints on 18-19 August will revive stories of its alleged smuggling into Australia, grand prix history, a spectacularly fiery demise and eventual re-creation.

The Sabakat, to be driven by owner Mike Gosbell, is a Lotus 12, the model that launched the British manufacturer’s first foray into Formula 1 and Formula 2 racing in 1957.

Pilot Ernie Tadgell of Toowoomba, 60 kilometres from Leyburn, bought the petite front-engined racer in Europe and is said to have ferried it home, disassembled, inside the fuselage of a crop-dusting plane. Re-assembled and to all intents and purposes “made in Australia”, it was re-named Sabakat in order to avoid any interest from customs officials.

From its first race in early 1958, the Sabakat appeared regularly around Australia, including in the country’s grand prix. But its 1.5-litre Coventry Climax engine was unreliable and eventually failed one last time in March 1960.

Tadgell substituted the Climax with – fittingly – a massive 16-cylinder Lycoming aircraft engine in time for the Australian Grand Prix at Lowood (Queensland) in June. Perhaps overwhelmed by its bulk and power, the Sabakat overturned after just two laps and burned to the ground in an intense white blaze fuelled by magnesium components.

Tadgell was killed some years later in a crop-dusting crash, but the Sabakat was re-created from remnants and replacement parts and reappeared in 1979, once again with Coventry Climax power.

Staged on a one-kilometre street course in the former gold-mining village, the community-run Sprints are supported by Tourism and Events Queensland’s Queensland Destination Events Program and the Southern Downs Regional Council.

Adult entry costs $20 a day or $30 for the weekend, with accompanied children under 14 admitted free.