SA Motocross Champions to be crowned in Monarto this weekend

SA Motocross Champions to be crowned in Monarto this weekend 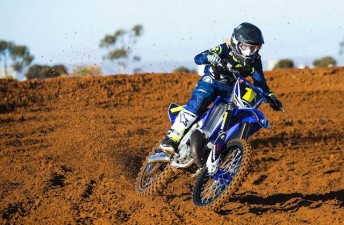 Travis Edwards leads both of his race classes entering this weekend’s final round of the SA MX Championship at Monarto. pic: Eric McConnochie

MEDIA RELEASE: The regional area of Monarto will be the setting for this weekend’s fourth and final round of the 2016 Peter Stevens Motorcycles SA Motocross Championships, known as the ‘SA MX Grand Final’.

With the event comes multiple close battles for the overall Championships across the various classes with the juniors set to do battle on Saturday and seniors on Sunday.

Both Travis Edwards and Taj-Gow Smith lead their two respective classes entering the weekend and exist as the favourites to stand on top of the podium at the end of the weekend. Smith took a clean sweep of victories in both classes at the last round in Port Augusta and will be hoping to continue that momentum into this weekend.

For Edwards, racing will be across the two days, making it a busy weekend for the Aldinga based rider however he remains focussed on the overall goal at the end of each day.

“It’s been a great season so far, in particular the first round at Gillman where I managed to get multiple race wins across the weekend. The ultimate goal this weekend will be to clinch the two Championships which will be a fantastic way to end the season,” Edwards said.

In MX2 Expert, the battle for the ‘Giles Whitton Cup’ has just five points separating leaders, Siegah Ward and Mitchell Norris entering this weekend with third placed Levi McManus from Victoria, just nine points behind Norris. The ‘Giles Whitton Cup’ is dedicated to the memory of the young rider, Giles Whitton, who passed away tragically in 2004 whilst practicing for the annual Millicent Supercross Event. Norris is a previous winner in 2010 and is joined on the honour roll by well recognised National competitors, Kirk Gibbs and Daniel Banks.

The 50cc Demo class will see 17 riders take to the track on Saturday in a strong showing of the ongoing growth of the Motocross discipline within the youngest in the two-wheeled community, all gaining critical experience as they climb the ranks into the future.

On-track action commences at 8:30am on Saturday for the juniors and 8am on Sunday for the seniors. The Monarto venue incorporates full catering through the canteen at the venue managed by the South Coast Motorcycle Club who are the official host club for the event.

This weekend also spells the last opportunity for you to buy a ticket in the SA Motocross Championship with first prize, a Yamaha TTR 110E, valued at $3,500 set to given away along with a range of other exciting prizes.

Multiple different spectator areas are available, allowing those trackside the opportunity to get a close up view of the racing from different angles and perspectives. Entry for spectators will be $5, payable at the gate upon arrival.

Official SA Motocross Championship merchandise will be available for sale along with race programs to keep up to date with the action across the day.

The fourth and final round of the 2016 Peter Stevens Motorcycles SAMX Championship, the ‘SA MX Grand Final’ takes place at the South Coast Motorcycle Club’s Monarto venue, near Murray Bridge on August 13 and 14.