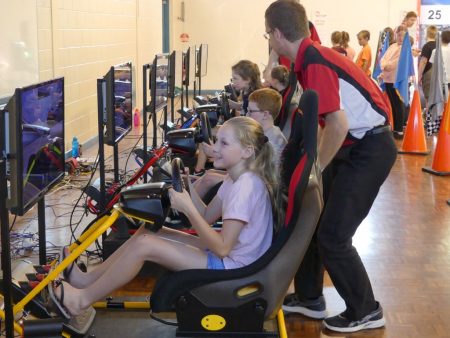 These Summer Holidays, nearly 1000 kids from 21 primary schools around Adelaide will be competing in the largest inter-school eSports racing competition!

Rev It Up Racing, who provide motorsport activities for kids, will be taking their kids’ Racing Simulators into schools around Adelaide to see which school is the fastest. The rules are simple: every school entered will compete in races throughout the day, and the school with the fastest average lap time at the end of the holidays, will be declared the winner and receive the OSHC Cup! (OSHC stands for Out of School Hours Care, commonly known as Vacation Care in the Holidays.)

As well as single driver races, they also run multiple driver races – where the kids must change drivers throughout the race. “It gives them the feel of endurance racing and the team work / strategy involved” explains Rev It Up Racing Co-Director, Jackson Freer.

“We have gone into schools for a while now with our motorsport activities – linked Racing Simulators, Pit Stop Challenge and our Race Start Challenge (reaction timer) – giving the kids some feel for what motorsport is like – so we thought ‘why not have an inter-school eSport race off?’” With around 1000 kids involved it could be a world record!

“Making the average fastest lap the winner, instead of the outright fastest, encourages the kids to work together. The fast drivers can coach the slower drivers to try and get them up to speed”.

This is the second year the OHSC Cup has been run, and last year, Largs Bay Primary School were crowned Champions.
The OHSC Cup runs across the Summer Holidays starting from December 17 until January 25.