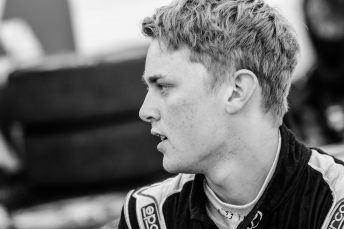 Over two days of alternately wet and dry racing at Taupo’s Bruce McLaren Motorsport Park, Yardley harried race winners John Penny and Matt Lockwood, making sure at every flag fall he was consistently banking points for his championship tally.

On Saturday, John Penny became the third winner in four races in the 2016-2017 Toyota 86 Championship when he won the first race of the weekend. After a race-long duel on a wet track with old V8-category foe Matt Lockwood that saw the race lead change a half dozen times, both sliding off the track and rejoining, before Lockwood had the mother of all spins on the last lap and Penny swept through to victory.

“That was the best duel I’ve had in ages. Matt’s a great racer and we have run hard against each other in the NZV8s for years so we both knew what we needed to do – and he was determined to score the win,” Penny said afterward. Fastest lap in the race was a 1:48.860 set by Matt Lockwood.

Then for the partial reverse grid race Penny drew the number eight marble, putting Matt Lockwood on pole with Brody McConkey beside him.

This time Lockwood scored the win that had eluded him on Saturday, battling with McConkey over the first lap then pulling away.

Ryan Yardley carved through the field and overtook McConkey to challenge Lockwood, but the wily ex-V8 racer kept his head and stayed the distance. Yardley was second, consolidating his championship points advantage and Reid Harker set fastest time, a 1:42.336.

Then in Sunday’s final race over 12 laps, Yardley had pole and led for the opening laps but the man on a charge was once more Matt Lockwood in the Placemakers TR 86. On a wet track he carved through the field from his start position of sixth, hunting down and passing rivals Reid Harker, John Penny and Michael Scott to close in on Yardley.

“I said yesterday I was hoping for more rain and we got it! Those opening laps were frantic, but once I got a lead it was just the fight between Ryan and me. He got closer in the last couple of laps but we got the result,” said Lockwood.

*Did not race this round
**did not compete in race three