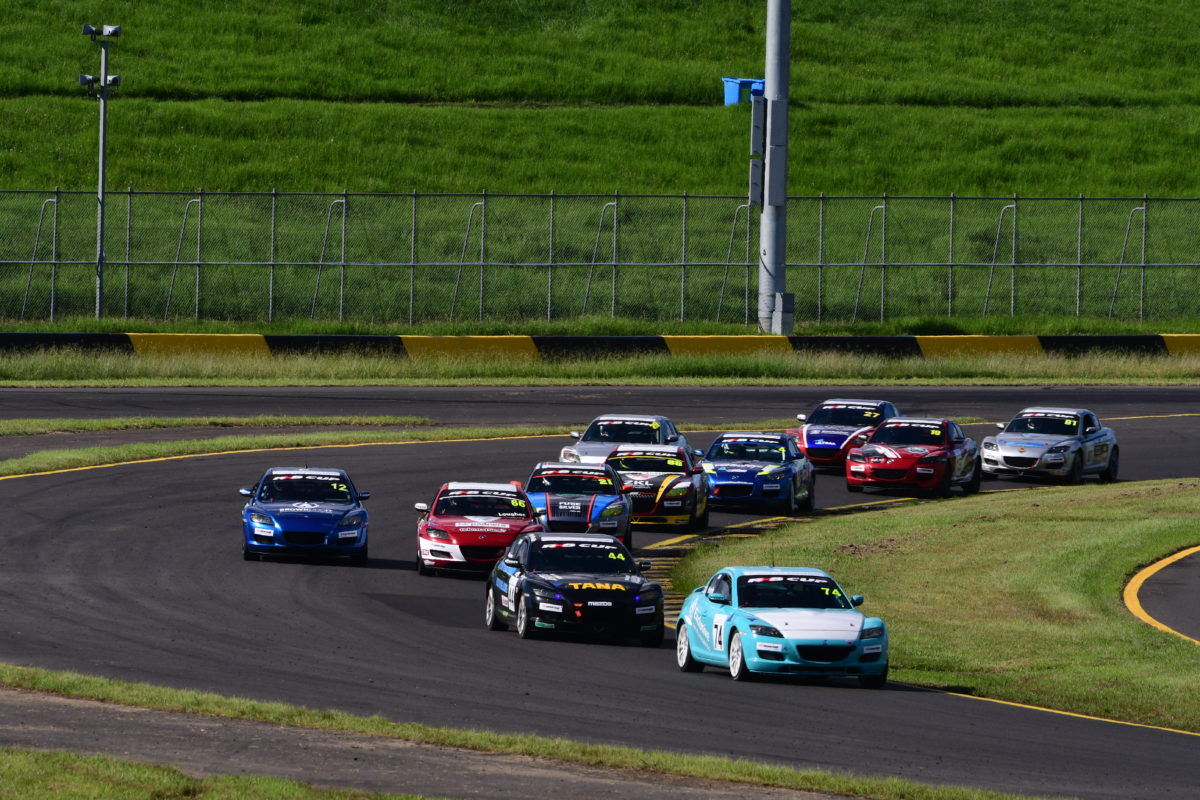 Leading up to this meet, Sydney was hit by many weeks of heavy rain and Sydney Motorsport Park was not spared. The unfavourable weather did not deter a strong field of 26 cars commencing the early morning qualifying session for the RX8 Cup. The track was very wet, and the outfield was diabolical. Any driver that ventured outside the track would become a passenger.

Jack Pennacchia handled the wet conditions the best by claiming pole from Thomas Duncan. The latter posted his fastest early on, he was one of the drivers that fell foul of the outfield. Aidan Riley and Justin Barnes shared row two, Jake Lougher and Jackson Noakes occupied row three. All drivers had a story to tell in the adverse conditions. No one more than Tom Shaw at the very fast turn 1. His car stepped out, and to his credit he somehow manhandled the car to a stop across the track in the middle of the corner. Fortunately he was able to quickly engage 1st gear and drive away from the dangerous situation. He recovered to set the 7th fastest time of the morning.

Race 1 was held in dark and wet conditions late Saturday afternoon. Pennacchia made the best start followed by Lougher and Elliot Malouf. As the cars approached turn 2, Duncan went wide and travelled on the wet grass until his car became bogged, he would stay there for the remainder of the race. Sam Silvestro almost followed suit, fortunately he managed to find his was back on the track. As the race progressed the leaders pulled away and subsequently spread out. The dicing amongst the midfielders was engaging.

Tom Shaw was having a spirited battle with Brad and William Harris, Myles Briguglio and Terry Lewis. Further back, Maisie Place was trading positions with Gina Bullians and Michael Sloss. The unfortunate Martin Lyall retired on lap 6, making the 2nd DNF of the race. Towards the front, Riley was putting plenty of pressure on 3rd positioned Noakes. Just behind them, the Harris brothers were handling the wet conditions better than most and proceeded to move up the field. At the end Pennacchia was the rain master and came home for a comfortable win. Lougher was 2nd and Riley was 3rd. Brad Harris and William Harris rounded up 4th and 5th.

Race 2 was held in dry sunny conditions; this would bring different drivers to the fore. Brad Harris made the best start from Lougher and Pennacchia. The leader’s car was a rocket in the dry, and quickly proceeded to pull away. Other drivers that showed their true pace were Justin Barnes and Tom Shaw. Barnes made his way into 4th position from a lowly starting position and commenced harassing Riley and Lougher (2nd and 3rd position). Barnes passed Riley at turn 4 and a few laps later claimed 2nd place down the main straight, by overtaking Lougher.

Tom Shaw was having a great dice with William Harris and Shannon McLaine, Moen and Jerome Nehrybecki kept Stacy Vickers honest in a great battle that would last most of the race. Vickers car stood out, was probably one of the best-looking liveries of the whole meet. David Cox was driving a very distinctive Teal RX8 with a union jack painted onto the roof, unfortunately his undertray was damaged and scraping on the ground lap after lap. Brad Harris romped home to finish 1st, followed by the hard charging Barnes. Lougher was 3rd from William Harris and McLaine. Jason Galer was the only DNF of the race

Brad Harris continued his great form by taking an early lead in race 3, He was closely followed by Barnes, Lougher, William Harris and Tom Shaw. The unfortunate Noakes went off at turn, with the car stuck there, his only option was to retire. The safety car came out for 2 laps, once the field was released a group of 7 cars pulled away from the pack. Brad Harris continued his march from Barnes and Lougher. William Harris made an aggressive move on Lougher at the fast turn 1. With two wheels on the inside grassy verge, he squeezed past. Not long after that Lougher coasted to an alt at turn 2 with a gearbox full of neutral. He eventually re-joined in last position. Ben Shaw and Duncan diced for many laps; the former was getting faster each run out. The best dice of the race was the 3rd place battle between Tom Shaw and William Harris, this dice went to the wire. Bradley Harris won his 2nd race of the meet from Barnes and William Harris; Tom Shaw was 4th and McLaine was 5th.

The final trophy race was held late Sunday afternoon in the setting sun. Bradly Harris pulled away comfortably to build up an early lead. Barnes followed and Tom Shaw and William Harris recommenced their dice from the previous race. The unfortunate Lougher encountered problems again. This time his car stopped at the approach of the last turn. His engine was revving; however, he could not engage a gear. Like previously, he resumed again in last position. There were a few early retirements in this race, Cox, Silvestro and Briguglio the unfortunate drivers. Martin Lyall, William Ham and Mark Adler were having a great dice. David Grice was tussling with Sloss. Apart from Bradly Harris up front, every other driver was busy finding space on the track. During the last lap, the unthinkable happened. The leader slowed down to retire, the 2nd placed car slipped down to 5th. It would have been a great surprise to William Harris and Tom Shaw coming onto the main straight to find the checker flag waiting for them. Both cars raced to the finish line with Harris edging out for the win. Barnes scrambled home for 3rd from Pennacchia and McLaine. Lewis came home 6th from Malouf and Duncan. Riley was 9th and Ben Shaw rounded of the top ten.

A special mention to Tom Shaw and Aiden Riley reaching 50 starts in the RX8 Cup.