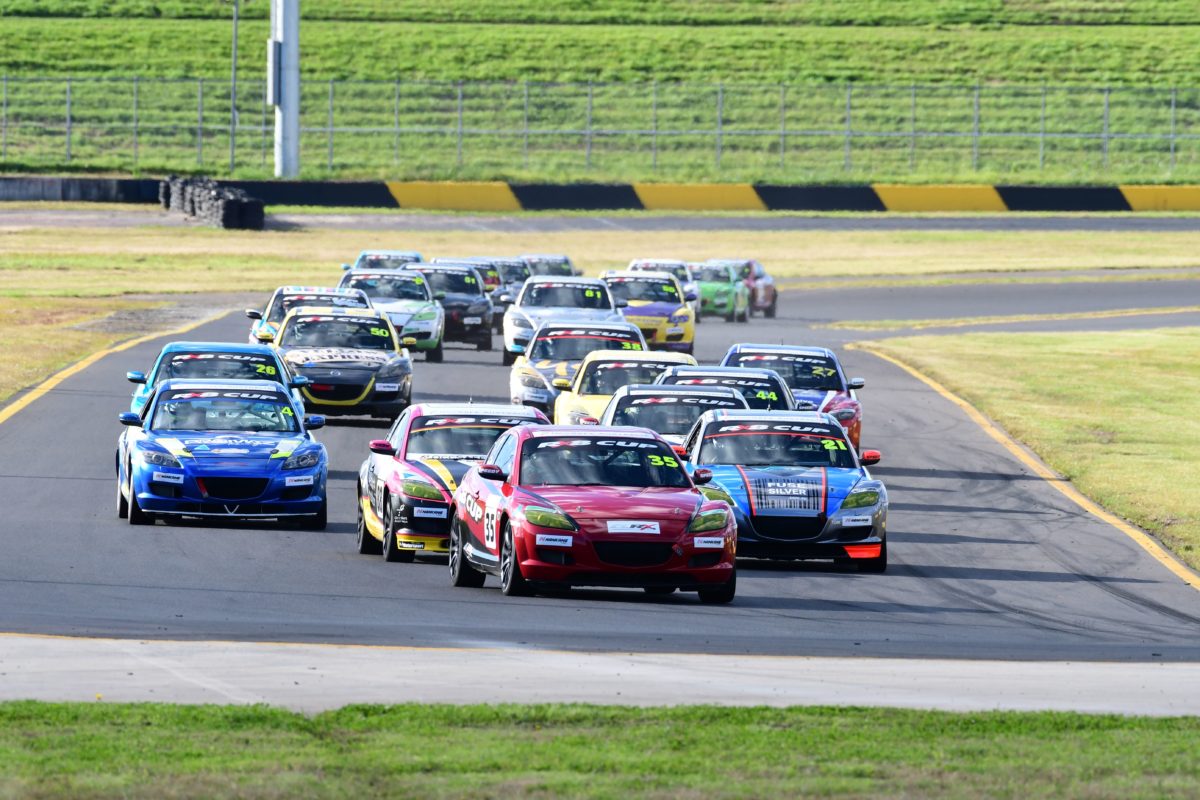 A large field of 23 cars came out to qualify, and amongst these fine drivers was none other than John Bowe.

The Tasmanian had never driver an RX8 prior to this event, and some wondered how he would go against some seasoned RX8 drivers.

They did not have to wonder too long.

He set a time that was good enough for the front row.

As mentioned, Bowe was beside him on the front row. Second row consisted of Shannon McLaine, and Thomas Duncan.

Row three was occupied by the hard-charging Justin Barnes, and Jack Pennacchia.

The remainder of the top ten were; Tim Berryman, Luke Webber, Ben Shaw, and Jackson Noakes.

Bowe made the best start and outgunned the field into Turn 1 and 2.

The leader was closely followed by McLaine, Tom Shaw, and Pennacchia.

The quartet at front preceded to pull out from the rest of the field and build a gap.

The unfortunate Sam Dashfield was the first and only retiree of the race completing just two laps.

Barnes toured the outfield between turn 1 and 2, he lost a couple of positions in doing so.

Once Barnes settled into the race, he preceded to have a race long dice with Terry Lewis.

Ben Shaw, Berryman, and Justin Lewis were also busy with their own battle for the top ten.

During Lap 5, Bowe dropped three places down to fourth position.

Tom Shaw put plenty of pressure on the leader, however it was to no avail.

Duncan was to be the best of the rest finishing in sixth.

Race 2 started in a similar fashion to the first, the same four leaders jostled for position at Turn 2.

Bowe outmuscled Tom Shaw and went into third position behind McLaine and Pennacchia.

During the second lap Tom Shaw went deep under brakes at the hairpin to reclaim that position back.

But the story of the race would happen behind them.

At Turn 2, Thomas Duncan dumped fluids as he came out of the corner.

His car continued slowly until it stopped at Turn 5.

The cars behind him spun on his oil, and there was RX8’s going in all different directions trying to miss each other.

The end result was a DNF for Jason Galer and Duncan.

Kiara Zabetakis continued on missing half of the rear bumper bar and most importantly a massive clean up for the track officials.

The safety car came out and the field followed it for the next three laps.

The officials realised that the cleanup would take too long, so the field finished under the Yellow Flag.

Bowe should of been in the top five, however he was relegated due to a five-second penalty.

Pennacchia and McLaine made the best start in the third race.

During the second lap, McLaine followed Pennacchia into Turn 2.

McLaine went deep on the inside, he put two wheels into the dirt and unfortunately, they made contact.

Pennacchia spun in front of McLaine as the rest of the field went past avoiding the accident.

Both cars continued on, rejoining the race in the midfield.

The unfortunate Duncan retired again, on the outside of Turn 2.

This caused the safety car to come out for four laps.

There had been enough drama in the first three races, all eyes were on the last race with the hope of an incident free event.

The front runners made an even start and a group of eight cars broke away from the rest of the pack.

Second placed car was fast, he was hounding the leader in most corners and set new lap record during the third lap.

He was not the only one showing speed, Berryman was making his way up overtaking cars at will.

By mid-race distance, he was fourth out right.

Towards the front, the group of eight reduced to six.

Terry Lewis made a mistake and dropped down the order, as did Tom Shaw.

Berryman prevailed at the end and won from Webber.

McLaine recovered to third and subsequently took out the round.

Pennacchia was sixth from Bowe and Justin Lewis.

Barnes and Jackson Noakes rounded out the top 10.

Apart from the mishaps in Race 2 and Race 3 the racing was excellent.

Ric Shaw should be complemented for running a professional category and the coup of getting John Bowe to participate was the cherry on top.

National Championship Standings after Round 4 Sydney