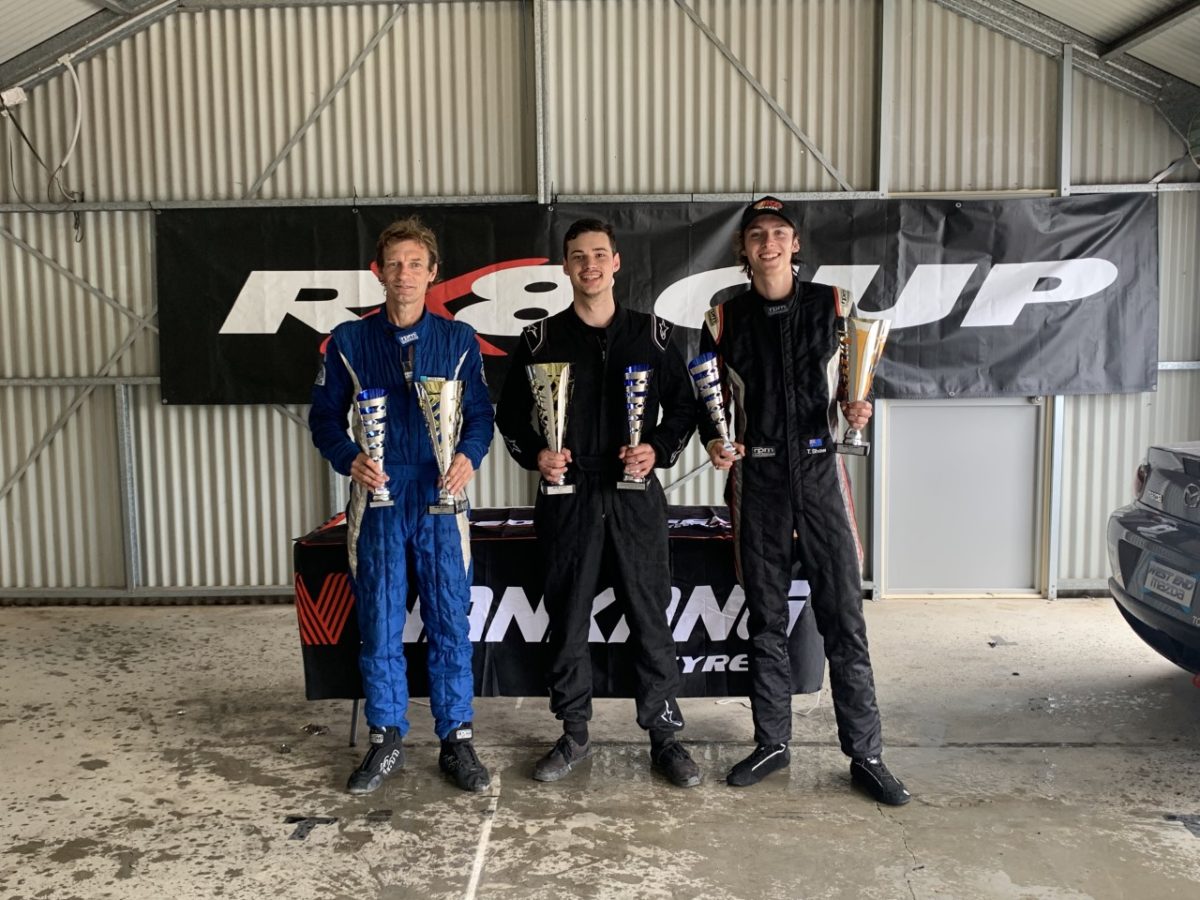 The final round of the RX8 CUP SERIES was held at Wakefield Park during the 11th and 12th of December. The Goulburn area was hit by heavy rainfall leading into the race meet and Friday practice was cancelled. By race weekend the track was mostly dry, however it had small rivers of water traversing the track at turn 1, turn 2 and the fishhook. This stray water would play havoc all day.

13 cars came out to qualify, a session that was marred by multiple spins due to the water. Ryan Gorton claimed pole with a solid time of 1:14.2383, over 1s clear of Tom Shaw who recovered from a spin out of the fishhook, to set a time good enough for the front row later in the session. Second row consisted Jake Lougher and Aidan Riley. Scott Thompson and Terry Lewis occupied the third row. The biggest surprise was the lowly qualifying position of championship contender Justin Barnes, managing only 8th place.

Race 1 was an eventful affair, Tom Shaw made a great start, with Gorton struggling for traction with a wet grid spot. Behind them it was another story, Lewis, Lougher and Riley made contact at turn 2. This incident caused Riley to travel through the gravel trap with slight damage to the front of his car. He managed to get out on his own accord. Lougher also continued with damage to his car. This was not the only accident, just before the top of the hill, Lewis spun due to an oil leak, with Noakes following him off. Noakes managed to get back on track, but Lewis was a DNF requiring a tow.

The safety car was called to stabilize the field. The running order behind the Safety car was Gorton, Tom Shaw, Justin Barnes, Thomas Petrovic and William Ham. It took a little while to clean up the track, once the field was released, Gorton continued his form in the lead. Thankfully, the rest of the race was not as hectic. Gorton arrived home in first place, and in doing so clinched the 2021 RX8 cup series championship. Barnes came home 2nd, a great drive from 8th position. Petrovich edged out Tom Shaw just before race end to claim 3rd place.

Race 2 was less eventful; Gorton and Barnes made the best starts. Barnes took an early lead and dragged his main rival away from third positioned Tom Shaw. As the two leaders powered away, a group of 6 cars formed from 3rd position to 8th position. They consisted of Tom Shaw, Lougher, Petrovich, Riley, Thompson and Noakes.

Maisie Place was having a personal dice with Ben Shaw, and towards the rear Mark Adler and Ham were just as spirited. The dice up front was intense; Gorton’s car filled the mirrors of Barnes. Eventually the newly crowned Champion went past and pulled away. Gorton notched up another win from Barnes. Tom Shaw scored a good third place from Lougher.

Race 3 was held Sunday morning; the track was dryer with only a small amount of water traversing the fishhook. Gorton made the best start from Barnes. It took little time for the leader to build a commanding lead. The battle for second was a different story. Barnes was being pursued by Tom Shaw, Lougher and Riley.

Tom Shaw tried a passing move on Barnes at the fishhook, this move opened the door for Lougher to get past young Shaw. By midrace distance Gorton had a 10 second lead from the pursuing pack. Further back Ben Shaw passed Maisie Place for 7th position. During lap 11 of the 14-lap race Tom Shaw repassed Lougher, and only a lap later he went past Barnes. The result was Gorton 1st by an 18 second margin. Tom Shaw came home 2nd just ahead of Barnes and Lougher.

Race 4 was to be the final race of the 2021 season, William Ham joined the field making it a 10-car grid. Ham missed the previous race due to gearbox issues. Gorton made the best start from Tom Shaw and Barnes. The field cleanly raced into the first 7 corners, all finding their own real estate on the track. Coming out of turn 9, Lougher’s car slowed up and started smoking. The driver jumped out and immediately opened the engine cover. The race director wisely neutralized the race with a safety car.

The Race restarted on lap 4, and the order was Gorton, Tom Shaw, Barnes, Riley and Noakes. Ben Shaw was dicing with Maisie Place. Further back Ham was battling with Alder, with the former receiving a 5 second penalty for starting in the wrong grid position. As the race matured, Ham spun on top of the hill, Place had to check up to avoid collision, allowing Alder to go past both. Ben Shaw was having a lonely race midfield, but his lap times were fast and most importantly consistent. Gorton had pulled away from Tom Shaw, the second-place driver had a small gap to Barnes and Riley. The field continued in those positions until the end.

The RX8 Cup Series returns to the track February 5-6th at Phillip Island for Round 1 of the 2022 series, proudly supported by major sponsor OccSafe Australia.