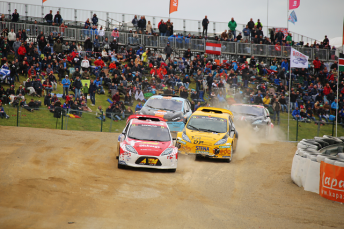 The RX2 International Series presented by Cooper Tires will officially rev into life at Mettet in Belgium this weekend (12-14 May), with a bumper grid of 18 high-calibre contenders all gunning for glory in the official FIA World Rallycross Championship feeder series.

Rebranded over the winter from its previous guise as RX Lites, RX2 has gained tremendous momentum in recent months, with a raft of driver announcements underscoring the series’ status as the place to be for any aspiring rallycross superstar.

Indeed, the entry list for the Belgian curtain-raiser reads like a who’s who of the next generation in the discipline, but arguably the man with the biggest target on his back at Mettet will be France’s Cyril Raymond, who clinched the 2016 RX Lites crown and duly enters the season as the early favourite.

Formbooks, however, are famously unpredictable – and never more so than with such a depth of talent throughout the field as is the case in RX2 this year. Raymond is joined by no fewer than five other RX Lites graduates, whilst five more have previously dipped their toe into the water with sporadic outings.

Sweden’s Simon Olofsson was a race-winner and regular podium-finisher last year – snaring the runner-up spoils at Mettet – whilst Norwegian duo Simon Wågø Syversen and Sondre Evjen have both shown they have the pace to challenge right at the front of the field. Kenyan Tejas Hirani is another name that cannot be discounted, as is Norway’s Thomas Holmen, who demonstrated consistent improvement over the course of the 2016 campaign.

Dan Rooke clinched the MSA British Rallycross Championship Supercar crown at his first attempt last season and much is expected of the highly-rated Englishman in RX2, while Swedish teenager William Nilsson is the youngest driver in the series at just 17 years of age and eager to prove his precocious potential.

Brother and sister Andreas and Jessica Bäckman are both keen to learn the rallycross ropes in the high-profile RX2 arena, as Tanner Whitten eyes history-making success in bidding to become the first American to lift the laurels in the FIA World RX support series.

Vasiliy Gryazin (Latvia) and Belgium’s own Guillame De Ridder will be looking to convert their rallying skills into rallycross results, while fellow home hero Ghislain de Mévius already has a proud heritage in the sport – he is the son of former FIA World Rally Championship star Grégoire de Mévius.

Glenn Haug (Norway) honed his craft at Super1600 level in the FIA European Rallycross Championship last year, and the entry list is completed by a trio of promising Swedish prospects. Sandra Hultgren has experience in both RX Lites and GRC Lites, Anders Michalak has enjoyed a diverse career to-date comprising stints in hillclimbing, Supermoto and Crosskart and Santosh Berggren made a one-off appearance on home turf in RX Lites last season.

The on-track action begins with free practice on Friday afternoon, followed by the first two qualifying races on Saturday and the remaining qualifying races, semi-finals and all-important final on Sunday. With so much quality in the field, picking a winner at this stage is nigh-on impossible!

Following its first outing at Mettet, the 2017 RX2 International Series presented by Cooper Tires will subsequently take in six rounds across three continents in support of the FIA World Rallycross Championship presented by Monster Energy, visiting Lydden Hill in Great Britain (26-28 May), Hell in Norway (9-11 June), Höljes in Sweden (30 June – 2 July), Trois-Rivières in Canada (4-6 August) and Lohéac in France (1-3 September) before concluding in Cape Town in South Africa (10-12 November).