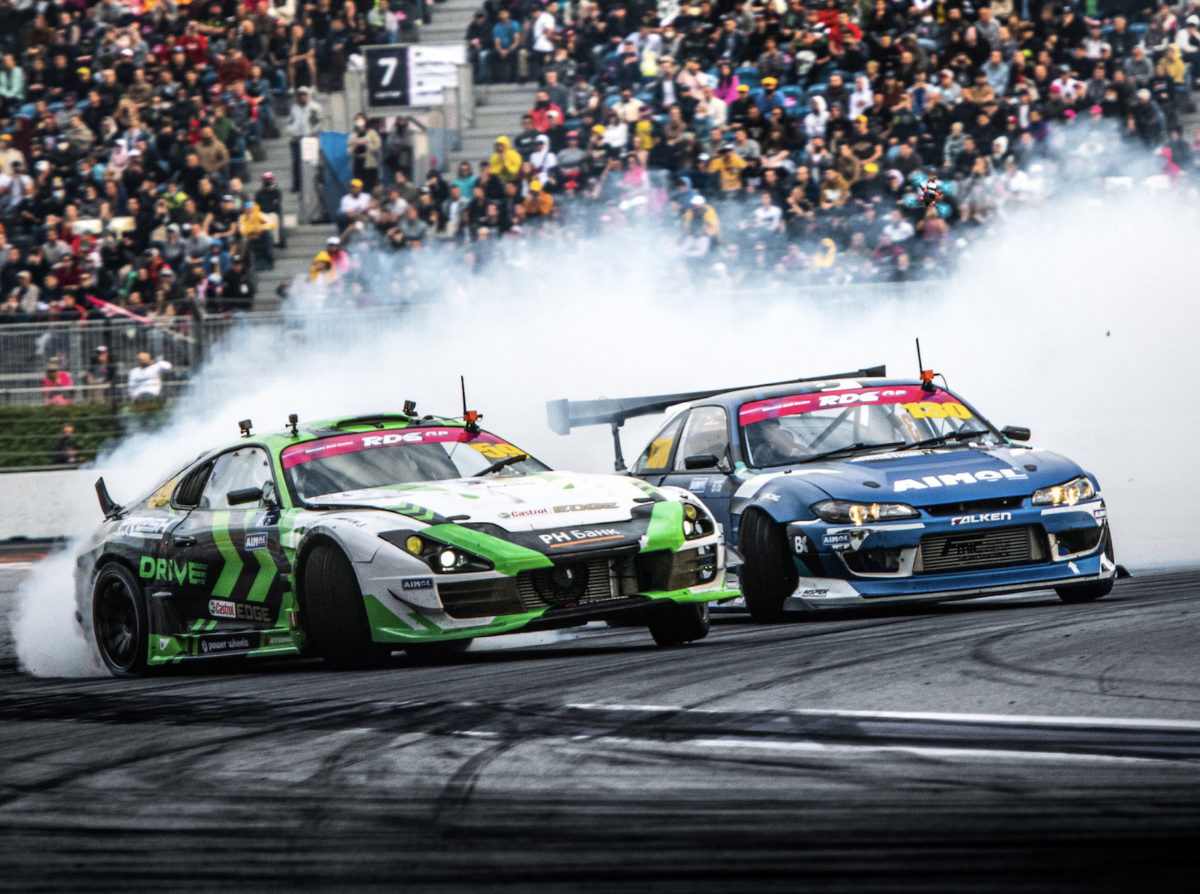 The final of the Russian Drift Series Grand Prix was held at Sochi Autodrom October 16-17, 2021. Season 2021 was very interesting for the drivers, teams, spectators, and all drift lovers, as the Russian championship gathered top drifters worldwide. The battle for the championship title held everyone in suspense until the very last run.

The RDS GP 2021 lineup was truly impressive: besides Russians, there were athletes from Ireland, Japan, China, Indonesia, Belarus, Latvia, and Ukraine.

The first appearance of Nikolass Bertans at the Ryazan round of RDS GP became a sensation. The 16-year-old Latvian driver vaulted to the top of the podium due to the incredible stability and skill he manifested in the final battle versus experienced Arkady Tsaregradtsev. NikNak became the author of the first rookie round victory in the history of RDS GP.

Another star of RDS GP 2021 was Jack Shanahan, a two-time champion of Ireland and Britain, vice-champion of Drift Masters 2019, who competed for the Fresh Auto Drift team. From the first round of RDS GP 2021 at Moscow Raceway circuit and to the finale in Sochi, the Irish driver has been demonstrating his peculiar aggressive style, speed, and deep angles, amazing all drift fans with his fluent and beautiful performance.

A strong lineup was brought to the 2021 edition of RDS GP by the Forward Auto team. Together with the three-time champion of Russia and two-time FIA IDC winner Georgy Chivchyan, the team was represented by three-time D1 Grand Prix champion Masato Kawabata, later replaced by Indonesian driver Emmanuel Amandio due to the pandemic, and Russian Red Bull athlete Roman Tivodar.

An incredible will for the victory, self-sacrifice, and truly fiery drift was shown this season by Arkady Tsaregradtsev, vice-champion of FIA IDC 2017. His Nissan 370Z caught on fire three times during the championship, including the qualifying round at Sochi Autodrom. Nevertheless, it did not hold the driver back on his way to the fourth line in the final standings of RDS GP 2021.

This high level of drivers created incredible suspense at all rounds of RDS GP 2021: the names in the top lines of the standings kept changing throughout the season. In the first five rounds, the victory was held by five different drivers, and in the final, there were six victory contenders. In Sochi, the drivers literally contested every single point.

The championship title of RDS GP 2021 was finally awarded to Irish driver Jack Shanahan. Georgy Chivchyan from Russia was the second, and James Deane from Ireland took third place.

In 2021, the Russian Drift Series embraced almost the entire country, from Moscow and Sochi to Krasnoyarsk. The Championship consisted of seven rounds held at seven different racing tracks, including two Formula 1 venues.

Dmitri Dobrovolsky, CEO of the Russian Drift Series:
“We held this championship at the highest level, proving RDS GP to be one of the world’s premier drift series once again. It makes me happy to see stands packed with spectators at every round in every city, and to know that hundreds of thousands of drift lovers follow RDS GP live broadcasts. Drift as a motorsport discipline is getting more and more popular in Russia. However, for us, the sky is the limit: we are going to raise the bar even higher, expanding RDS geography, involving new tracks and expecting just as brilliant lineup from all over the world next year”.

RDS GP drivers about the championship in 2021

Georgy “Gocha” Chivchyan (Russia), driver of the Forward Auto team:
“I have taken part in many competitions in Russia and abroad, so I can compare events and I am confident that the Russian championship is the best in terms of organization and the professional team that makes up such intensive racing weekends for all of us. I like drifting on different tracks all around the country; I guess this is something other racing series might envy. Every year, we see different scenes, with new cities and new venues involved. The abundance of professional racers from other countries makes it even more exciting. As a racer, I feel that competing with them, I am getting much more experience”.

James Deane (Ireland), driver of the Aimol Racing team:
“It has been an honor and a pleasure to finally compete in RDS with the Aimol Racing. I have really enjoyed taking on the challenge of new tracks, new drivers, and new judges. My team and I are proud to be in the championship fight going into the last round. It has been a brilliant experience!”

Jack Shanahan (Ireland), driver of the Fresh Auto Drift team:
“I was a little nervous at the beginning with the whole experience being new to me between the country, series, team, and the car, but after the first round, I was very happy that I decided to go and compete in RDS. I really think RDS is one of the best series in the world, it’s very professional, and the fans are amazing! I think everyone should be very happy with the season this year. It has been quite incredible from my behalf gaining lots of experience driving the Supra and driving new tracks with lots of great drivers”.

Arkady Tsaregradtsev (Russia), driver of the FailCrew Darkside team:
“It was the hardest and the most exciting season in the entire history of the championship. With the incredible entry list and the strongest competition ever, this was doubtlessly the most spectacular global drifting event ever!”

Nikolass Bertans (Latvia), driver of the Aimol Racing team:
“I will never forget this season, especially Ryazan, which was my debut in this world-class championship! RDS is the best option for competing. The drivers here are amazing! The organizers here are professionals in their field. I am very happy to be a part of RDS”.

Emmanuel Amandio (Indonesia), driver of the Forward Auto team:
“RDS GP for me is a dream that came true! The best drifters from all over the world come together to compete for the title. The unique competition atmosphere makes this event one of the best in the world”.