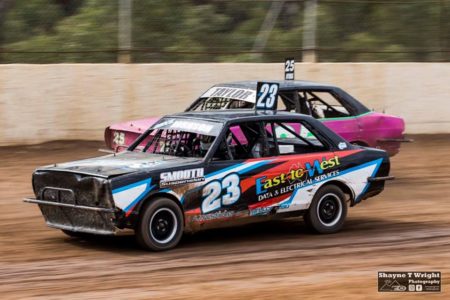 This Saturday night at Rushworth Speedway, the Goulburn Valley Auto Club will provide thrilling entertainment that includes several visiting classes joining the local superstars and their cars. A Sports Sedan feature along with features for 1200cc powered Junior Sedans and the larger six- and eight-cylinder Junior Sedan class. The Grand Prix Midgets will also be in town for their ‘Ironbark Classic’.

With Anthony Knight, Steve Akil, Luke Fallon, Steve Kershaw, Jay Nicolaisen, Jamie Lock, Nathan Shortis and Jaiden McCann amongst the Sports Sedan nominations the race to get hands on the big prize money being offered in the ‘Claridge Property Investments 1000’ will be on for young and old. Fans will see a mixture of six cylinder and eight-cylinder powered race cars come together with some very quick cars amongst the line-up.

In the’ Total Tools Bendigo’ Junior Sedan Spectacular, drivers will come from local areas and away from town with recent winners in both classes amongst entries. The Bendigo based Claridge family have three sons racing Bradin, Connor and Tyler and some very strong competitors from Ballarat, Melbourne and the far North East all have their eyes on the big prizes also. In the open engine class, the Claridge’s will have to be better on race night than Dylan Barrow, Rhys Meakins, Marty Bassett and others whilst in the restricted 1200cc class of Juniors Arthur Hutchinson, Sam Cherry, Brock Johnson, Jemma Woods and Bryce Leek have put on competitive racing recently around the North East.

Grand Prix Midget action will see former national champion Rod Saville travel down to do battle with the Victorian contingent for victory in the Ironbark Classic. Ash Booker is expected to by amongst the nominations after winning at Wahgunyah recently, Chris Fowler and local Shepparton racer Alex Myers are some of the entrants to watch as the open wheel 1000cc plus pocket rockets fly around Rushworth.

Local action in the Goulburn Valley Open and Production Sedans is potentially going to be a combined field. The three car Smith team of Scotty, Daniel and Matt will be back and raring to go with Garry Gapes a former class champion, Bevan and Shane Hutchins and Andrew Ahearn just some of the drivers to watch.

Belinda Chalcraft is the class racer in the Ladies field so far this season, however Chelsea Hodge, Nicole Gapes and the return of Debbie Pratt to competition will make racing interesting.