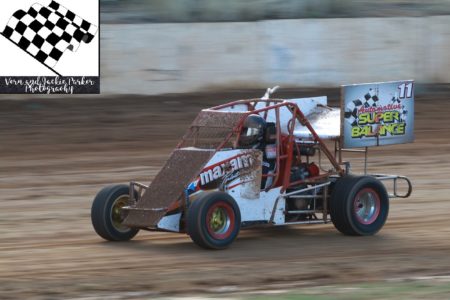 For the first time in over twelve months, Rushworth Speedway will thrill motorsport fans in the Goulburn Valley with racing this Saturday afternoon from 4pm and into the night. Racing to start a short yet action packed season includes the 2020/21 season Australian Grand Prix Midgets Title plus visiting Sports Sedans and all the local club class heroes.

Nineteen flying Grand Prix Midgets and their drivers have been nominated to vie for the title victory with current Australian Champion Rod Saville travelling down from New South Wales to try to defend his title. His daughter another stand out racer Janelle Saville is also making the trip into the Valley. The Saville’s lead a squad of five others from New South Wales bringing their miniature rear engine based open wheel race cars which includes, some of the cars from New South Wales will be driven by Shepparton locals including Mark Cecil and David Bacon, whilst Gary Bowyer is another strong competitor to keep an eye on.

The Victorians in the field are led by recent state championship winning Kyabram racer Louis Rodriguez. Rodriguez has shown plenty of speed this year in his various race cars and this Saturday he is the favourite from the Garden State however is in the field with others that are very fast such as Ashley Booker, Alex Myers of Shepparton and the new Victoria #3, Chris Fowler and Travis Florrimell are just some of the Victorians keen to get their hands on the Australian title trophy.

Twenty plus Sports Sedans have nominated to compete with some impressive drivers names in the line-up for those that follow the class. Lucas Conder from Ballarat, Jay Nicolaisen from the Goulburn Valley club, Jamie Lock, Jaidyn Dredge, Matthew Brooks and Corey Knox are names that have shown they can really wheel their race cars. Expect some of the other competitors from the entry list to hustle to get their name in the top five finishers by the end of race night.

Local Goulburn Valley classes racing might produce some new winners as new drivers come in and drivers with more experience last season move to the front of the pack. Daniel Smith, Bevan Hutchins, Wayne Gilsenan, Troy Briitton, Matt Smith, Matt Callanan and Garry Gapes makes the Open Sedan class an exciting prospect for the evening. Picking a winner is like finding a needle in a haystack, very hard to do.

Production Sedan competition should also be tight with some experienced campaigners such as Jason Ahearn, Shane Hutchins and Warren Alexander leading the way. Belinda Chalcraft leads the Ladies Sedan field with experience already this season racing away from Rushworth, and the Junior Sedans racing see’s Bradin Claridge the favourite after winning last weekend at Wahgunyah Speedway.

All the action begins at 4pm on both days.