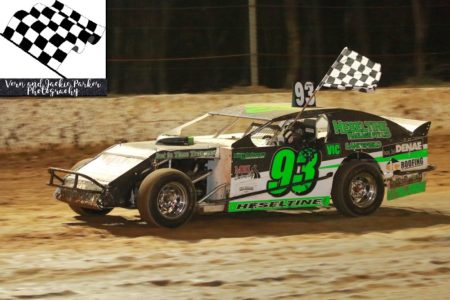 The Goulburn Valley Auto Club ended its season at Rushworth Speedway with five visiting classes and their features supported by all the local stars in their sedan cars and a terrific night of racing finished with wins to Kali Hovey in the Hot Rod “Ray Welsh Memorial’, Justin Paull in the Compact Speedcars ‘Presidents Trophy’, Tristan McGraw in the Sports Sedan feature race, Wayne Sheerman in the Standard Saloon feature race and Dean Heseltine in the AMCA Nationals state series round.

Dean Heseltine’s victory in the AMCA Nationals was impressive when he came from fifth in the field working his way forward to finish the winner after taking the race lead halfway through from Tim Reidy. The two have been duelling against one another the last few seasons and once again they led the field. Heseltine won by just .310 of a second at the end of the twenty laps with Reidy in front of Paul Sullivan, Neale Peachey, and Stephen Hopkins.

Victorian Champion Justin Paull won all three qualifiers in the Compact Speedcars racing before winning the feature event. Behind Paull his sister Tania Hallett and Mike Conway jockeyed for position and swapped second and third before Conway pulled a little distance away from Hallett. Paull, Conway, Daniel James from Shepparton finished in third, then Hallett and Gavin Cooper were the top five order.

Shannon Meakins won all three qualifiers in the lead up to the Ray Welsh Memorial feature event. As is tradition a random draw decided where the qualifiers would start the final and Meakins drew last spot whilst his wife Kali, drew pole position with everybody else in between. Meakins passed three cars on lap one determined to win the event. By lap seven Hovey still led with Dean West in second and Meakins in third ahead of Phil Jenkins. As the chequered flag dropped at the end of fifteen laps Hovey defeated her husband by .164 of a second to win the Memorial with Jenkins third, Chris Wilkes in fourth and Eddie Ivermee in fifth spot.

Matt Domburg, Wayne Sheerman and Warrick Howie shared two wins apiece in the ‘Stow’s Earthmoving and Landscaping’ supported Standard Saloon’s in qualifying races. Howie from Wodonga qualified on the front row with Sheerman in a seventeen-car feature field. At the halfway mark of the final Howie was leading Sheerman with Nick Chrystie who started in sixth now in third place. On lap seventeen from third spot Sheerman passed not only Chrystie who was just ahead of him, but Howie too and took the race lead. Sheerman in an exciting finish won by just .018 of a second from Howie, Chrystie, Domburg and Aaron Marshall from Bendigo.

Mick Rizzoli was the strongest driver in qualifying for Sports Sedans and qualified for the pole position starting spot ahead of Tristan McGraw from Numurkah. Marcus Reddecliffe, Zac Swanson, Lucas Walker from Echuca, and Rhys Collins were all top six starters in the final. At the ten-lap mark of the feature Reddecliffe led, Rizzoli, McGraw, Brooke Ferguson who had raced from seventeenth spot to fourth in ten laps and Walker. McGraw took the race lead from lap sixteen with four laps left to run and he went on to win from Reddecliffe, Rizzoli. Ferguson and Walker.

In a combined Goulburn Valley Opens, Productions and Ladies final Lennie Clark led the first six laps of the race before Boyle took the lead. Production Sedan racer Ahearn moved through to third place on track. On lap fourteen Ahearn passed Clark and at the chequered flag Boyle picked up the overall win and first in Open Saloons, Ahearn picked up second in the overall and first in Productions with Clark third in the overall, then Scott Smith and Bevan Hutchins.

Rounding out the results Anthony Hanson led from lap two in winning the Junior Sedan final from Jack Houlahan and Caleb Simmonds.

With the season over, Goulburn Valley Auto Club wish to thank the fans, drivers and business supporters for their support and encouragement. The club now will work towards a hopefully full season for 21/22 beginning in October.