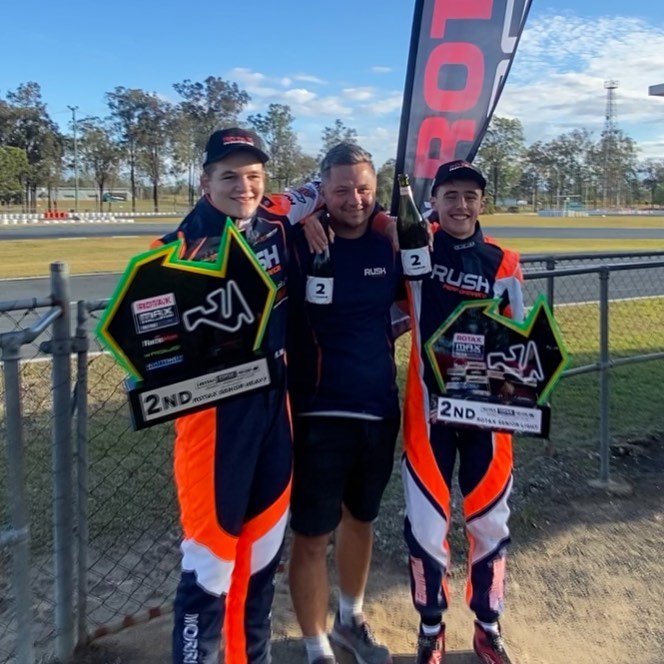 Rush Performance returned to the Rotax Pro Tour over the weekend for the third round of the championship. Heading into the sunshine state the team had limited preparation due to their busy racing schedule. The seven-driver team across four classes was hitting the Ipswich Kart Club looking to continue their strong 2022 season and chase victories.

Zane Morrison was the sole Rush Performance entry in the Rotax Heavy category in the field of near fifteen drivers. Morrison did an excellent job putting himself on the front row in qualifying and backing this up in the shootout. Morrison ran in second spot in all heats except a fourth in heat three, keeping him in excellent shape for the final. Zane put in a stellar drive in the final to come home on the podium in second spot in an excellent result for the team!

Hunter Pearce was the youngest driver running under the Rush Performance banner in the Micro Max category. Pearce was able to do an awesome job in qualifying setting the third fastest time. Hunter ran inside the top five in all three of the opening heats with a second in the pre final and a third in the opening heat the highlights. Pearce was right in the mix for victory in the final in one of the races of the day, coming home just off the podium in fourth position overall!

Rush Performance had the triple driver attack in Junior Max in Jett Kocoski, Toby Spinks and Kamal Mrad hitting the track. Kocoski led the charge in qualifying coming home in seventh, with Spinks and Mrad in eleventh and seventeenth. Kocoski led the way in the heats moving up as high as fourth place in the third heat, with Spinks and Mrad both moving forward. Mrad had a seventh and eighth in two of his heats and Spinks had an eighth and ninth running in the top ten. The final was a mixed result with Kocoski and Spinks coming home in the top ten in position seven and ten overall. Mrad after running inside the top ten had a final that didn’t go his way, dropping him down to position seventeen overall.

Rotax Light had the double driver attack to finish Rush Performance assault in Gianmarco Pradel and Lewis England. Pradel qualified in position seven in the twenty-kart field with England just outside the top ten in position thirteen. Pradel put in a sensational effort in the heats moving forward to fourth in all three heats and second for the pre final. England raced on the edge of the top ten but a DNF result in heat two hurt his starting position chances. Pradel put in a scintillating final and looked a live chance for victory but just fell short for an excellent podium finish in second spot overall. England managed to move his way up and come home with his best finish of the weekend in tenth spot overall.

Team owner and manager Jamie Rush spoke post weekend on the teams’ double podium result. “We always knew coming to Ipswich without any testing it would be a tough one to compete with the locals. To come so close to winning in Seniors with Gianmarco was a bitter sweet feeling as it would’ve been better to come home with the blue plate! Zane did a fantastic job all weekend in Heavies to get his first podium with us”. Rush Performance will be back on deck next month for round four of the SP Tools Australian Kart Championship in Emerald.