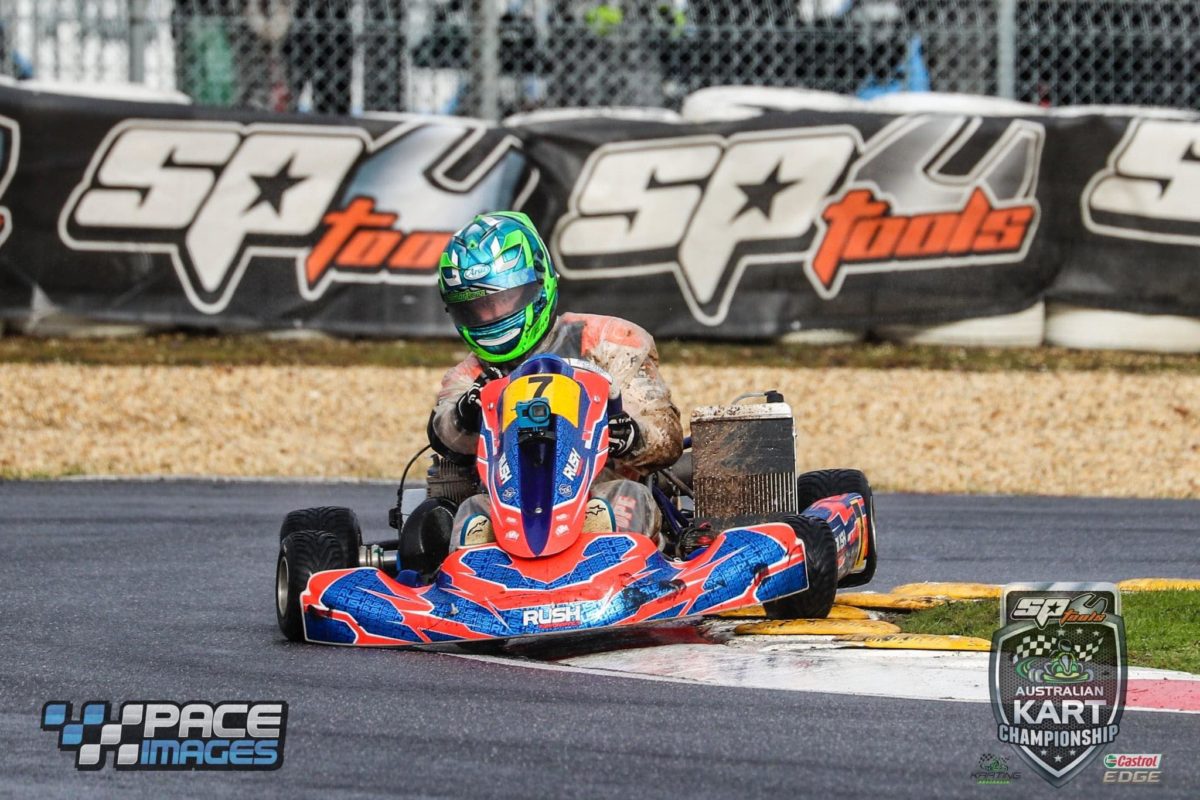 Rush Performance took a team of eleven drivers across four classes to the most recent round of the SP Tools Australian Kart Championship over the weekend. The team being led by Jamie Rush and multiple time Australian Champion Pierce Lehane were looking to come home with strong results. With what was going to be a wet and wild weekend, the team were ready to give it their all and get the best result possible.

KA2 Junior was the most highly represented class with five Rush Performance karters in Jett Kocoski, Kamal Mrad, Christian Estasy, Toby Spinks and Ruben Dan. Kocoski led the charge in qualifying putting himself in the top five, with Spinks inside the top fifteen. Mrad, Dan and Estasy were all outside the top twenty five and wanting to move forward. Kocoski was the shining light in the heats, never leaving the top five and being off pole position for the all important final. Dan, Estasy and Mrad all move forward across the heats with some bad luck for Spinks, resulting in a couple of DNF’s hurting his chances. Kocoski was once again the shining light, putting in an excellent performance in the final, coming away with third place overall! Dan came home just outside the top fifteen in position seventeen overall, while Spinks, Mrad and Estasy didn’t make the finish in the daunting wet conditions.

Luca Nici was the sole Rush Performance entry in the premier KZ2 gearbox class. Nici was racing in a near full field of forty entries and set a time just inside the top thirty in position twenty nine overall. Nici had a couple of DNF’s that hurt his overall points but a top fifteen in heat three showed he had the pace to move up the grid. Due to his DNF results Nici started down in position thirty three but was able to charge his way into the top twenty and come home in an incredible position fifteen overall!

Zane Morrison had the Rush Performance duties in the TAG 125 class. In another full field of nearly forty drivers, Morrison was able to set the eighteenth fastest time and had his eyes forward. Zane did a brilliant job in the heats finishing all races and breaking into the top fifteen. Morrison went as high as position twelve in heat two and three and fourteenth in heat three. Morrison got a great start in the final and had worked his way to as high as sixth spot until being ruled out of contention on lap eight of the final.

X30 had the four driver attack in Jaiden Pope, Angus Wallace, Gabriel Van Jour and Gianmarco Pradel. Pope led the way in qualifying setting the thirteenth fastest time with Pradel, Wallace and Van Jour down in position sixteen, twenty three and twenty eight respectively. All drivers improved on pace and position throughout the heats with Pope as high as sixth, Pradel as high as seventh and Wallace pushing the top ten in position twelve. Pope put in an excellent final in tough conditions, coming home in position ten overall! Pradel wasn’t far behind in position twelve and Wallace just outside the top twenty in position twenty one. Van Jour had unfortunate finish to Sunday with a DNF and DNS in the final.

Team owner Jamie Rush spoke post weekend on the ups and down and terrible weather. “It was probably one of the toughest weekends we have had with the terrible weather conditions. All our drivers did a great job to push through and keep improving throughout the weekend. It was great to see Jett get his first AKC podium as he has been working really hard to get there. Looking forward to Emerald and hope the weather is a little warmer”. Rush Performance will be back at the fourth round at the SP Tools Australian Kart Championship at the Emerald Kart Club.