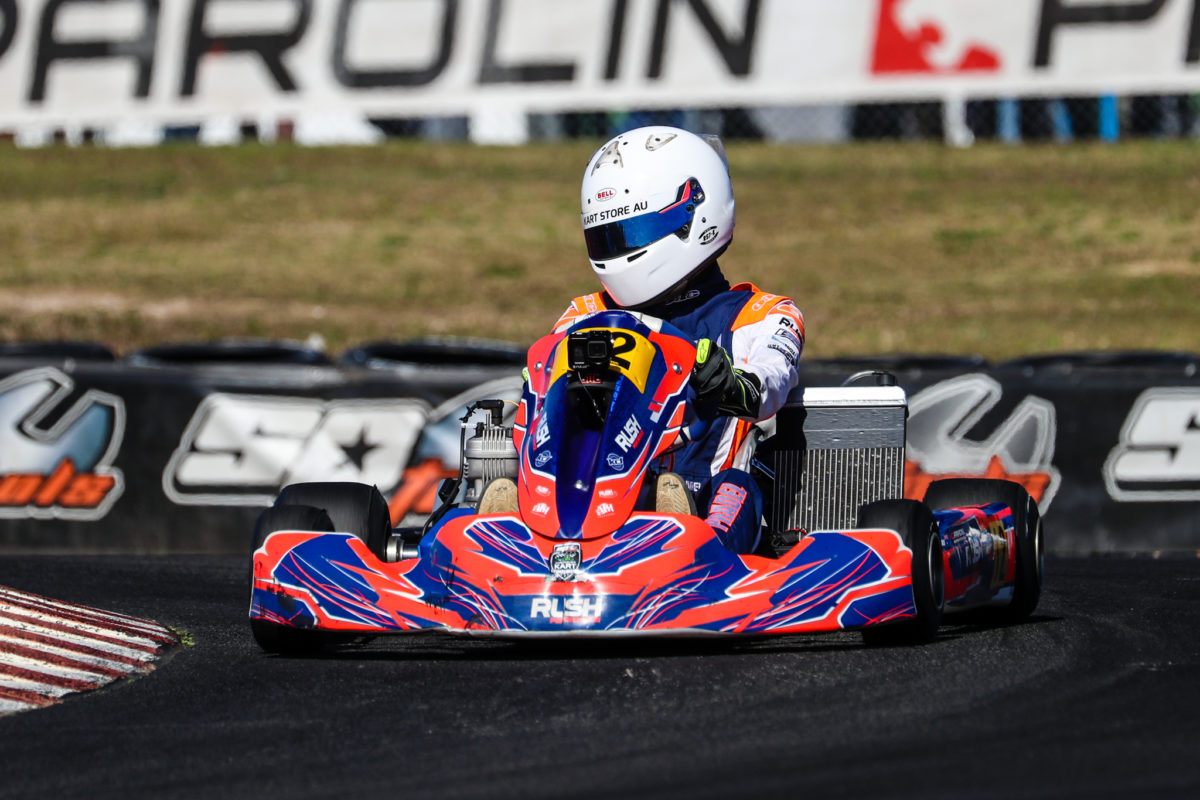 Jamie Rush led the powerful Rush Performance stable to the final round of the SP Tools Australian Kart Championship decider at the Newcastle Kart Club.

Rush, alongside multiple time national champion Pierce Lehane, led a team of 10 drivers ranging from Cadet 9 through to the senior ranks.

Rush Performance was looking to finish the 2022 championship on a high.

Pope starred in qualifying, putting himself out of fourth with Pradel and Van Jour back in eighth and 12th respectively.

Pope and Pradel led the charge across the heats both racing in the top five and both having best results of third spot.

Van Jour was just outside the top 10 across the heats until a brilliant eighth in Heat 4.

Pradel was right in the battle for victory to close the weekend, coming home in a brilliant second spot.

Van Jour was just outside the top 10 in 11th and Jaiden Pope was able to come home in the top five for the championship after his brilliant results across the season.

Hunter Pierce was the youngest driver to take the track in the Cadet 9 category for Rush Performance.

Pierce qualified down in  17th  but slowly made his way forward across the weekend pushing on the back of the top 10.

Hunter took his best result of the weekend in the final coming home in a brilliant eighth.

Logan Lalas took on the ultra-competitive KA4 Junior class and had a rough start to his weekend, being excluded from qualifying after setting the 15th fastest time.

Lalas starting out of  32nd was able to move up 11 positions in both opening heats.

He was able to finish his weekend inside the top 20 in 18th overall.

Jake Horsey was another single driver for Rush Performance, this time in the KA3 Senior class.

Horsey qualified just outside the top 15 in 16th overall.

Two brilliant top 15 finishes in Heat 2 and Heat 4 kept him in with a chance of a strong result.

KA2 Junior had a strong Rush Performance presence with the four driver attack of Toby Spinks, Jett Kocoski, Christian Estasy and Aidan Williams. Spinks led the charge in Qualifying landing in fourth with Estasy, Kocoski and Williams in 18th, 26th, and 29th respectively.

Spinks was able to take out two heat wins in a strong showing, with Kocoski, Estasy, and Williams all moving forward across different heats.

Spinks crossed the line in third spot in the final before a heart breaking exclusion took the result away.

Kocoski was able to come home inside the top 15 in 14th.

Williams came home inside the top 30 in 28th in a tough field, with Estasy ending his weekend with an unfortunate DNF.

“Great pace this weekend with some good results all around,” Rush said.

“Gianmarco did a great job all weekend in X30 just a shame we couldn’t quite convert that pace into a round win.

“Proud of all of our drivers this year and looking forward to the off season with some hard work to hit the ground running in 2023.”

Rush Performance will be back in season 2023 for another crack at the SP Tools Australian Kart Championship in 2023.