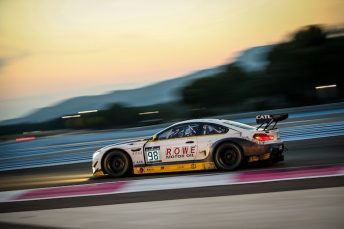 St. Ingbert, 25th June 2017 – Just as it was last year, ROWE RACING was plagued by bad luck at the 1000-km race in Le Castellet, which forms part of the Blancpain GT Series Endurance Cup. Following a hectic start, the trio that secured victory in Spa in 2016 had worked their way to the front of the 58-car field in the #99 BMW M6 GT3, only to be forced to retire half way into the six-hour race. The #98 car also dropped out of the race at the former Formula 1 circuit in Southern France whilst running in a promising position.

As soon as the team returns to its headquarters in St. Ingbert, it will switch its focus to the second highlight of the season: the 24 Hours of Spa on 29th/30th July, at which ROWE RACING will line up as defending champion. The iconic racetrack in the Belgian Ardennes region will host the official test day on 4th July.

Qualifying went to plan for both cars. Belgian BMW DTM driver Maxime Martin and the two BMW works drivers Philipp Eng (Austria) and Alexander Sims (Great Britain) started the race from twelfth place on the grid in the #99 car. The second BMW M6 GT3 with the #98, in which Finland’s Markus Palttala shared the driving duties with BMW DTM drivers Bruno Spengler (Canada) and Tom Blomqvist (Great Britain), started from 23rd.

The endurance race began frantically, with many crashes resulting in several full-course yellows and two appearances by the Safety Car. The top teams reacted to these disruptions with different strategies. The #99 car then established itself in the top five and led the race on a number of occasions. However, it was then forced to retire with a damaged suspension whilst leading the race, shortly before the halfway point. The second BMW M6 GT3 was running between fifth and tenth place as the six-hour race entered its final three hours. However, the car was so badly damaged as a result of a puncture, that it was unable to continue, despite making it back to the garage.

ROWE RACING team principal Hans-Peter Naundorf: “Le Castellet does not seem to be a happy stomping ground for us. Like last year, our dress rehearsal for the 24 Hours of Spa was a bit of a flop. However, we will take this as a good omen. Our qualifying performance was a big step in the right direction, and we could have finished in the top ten if not for the puncture on the #98 car and the suspension issue on the #99. We don’t have much time to be frustrated by this result. As soon as we return to St. Ingbert, we will focus on preparing the cars for the test day in Spa.”