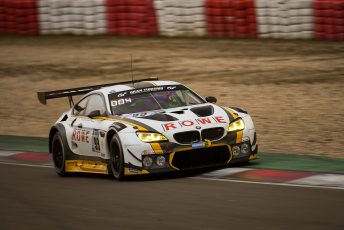 St. Ingbert, 23rd May 2017 – The stage is set: The 45th ADAC Zurich 24h race at the Nürburgring is offering a ride through the “Green Hell” on 27th/28th May and captivates teams, drivers and fans in equal measure. At the major highlight of the season, more than 600 drivers, ranging from professionals to amateurs, in 161 cars will go on the attack in the biggest race in the world with the highest number of entrants, on the longest – and most beautiful – racetrack for 24 hours on the 25.738-kilometre combination of GP track and the legendary Nordschleife. The competition this year might just be the fiercest it has ever been since the inaugural “Eifel Marathon” in 1970. Around 30 cars are capable of winning in 2017 – and these include the two ROWE RACING BMW M6 GT3s.

Since being founded six years ago, the team from St. Ingbert has competed in the 24h race every year, and is hoping for another good result on the seventh attempt – maybe even a third podium position. ROWE RACING, together with partner BMW Motorsport, who have already celebrated 19 overall wins, are counting on experience and continuity. Six of the seven top drivers who will compete represented the team in 2016.

The Belgian BMW DTM driver Maxime Martin and the two BMW works drivers Philipp Eng from Austria and Alexander Sims from Great Britain, who won the 24 Hours of Spa together in 2016, were the “Best of the Rest” in fifth place last year, behind the victorious Mercedes quartet, and have great plans for their next joint attempt. The trio will receive support in the #99 BMW M6 GT3 from the only newcomer to ROWE RACING. German Nordschleife specialist Marc Basseng not only brings the experience of 26 race wins in the VLN Endurance Championship, he also knows how to win the 24h hour race, a feat he achieved in 2012, which gives him an advantage over his team-mates.

In 2015, Maxime Martin alongside Finland’s Markus Palttala and Brit Richard Westbrook finished second by the until that time shortest gap in the history of the 24h race; they were just 40 seconds behind the winners. Palttala and Westbrook will now tackle their next joint venture in the #98 BMW M6 GT3. Like last year, they will share the cockpit with Dutchman Nick Catsburg, who – as in 2016 – will once again be in a dual role and will also make two appearances in the WTCC. Alexander Sims will also be pulling a double shift; in addition to his laps in #99, he will be the fourth driver in #98.

Hans-Peter Naundorf, team principal ROWE RACING: “We have no doubt completed the most intense preparations for a 24-hour race that we have ever been involved in. The starting field is more well-balanced and stronger than ever before. Even more manufacturers have registered, who could win the race, additional good drivers and teams. The changes to the regulations in particular mean that everyone is facing uncertainty and it is hard to judge the performance of all the cars. I still don’t understand why the BoP has been intensified for BMW and not for other manufacturers. The VLN races and the qualifying race didn’t provide much clarification. We saw a lot of chaos and edgy nerves in these races, which could be the case again. Even though we don’t know exactly how we measure up, we are positive and look forward to a great battle. Our first goal is to make it into the top 30 qualifying. The fact that we are in the race and are not yet represented there, which has never happened before, shows just how hard the race is this year. I am very happy with our drivers, we built up a good rapport last year. All of the guys are very fast and have a lot of experience. Our winning trio from Spa drove well together again most recently two weeks ago in Silverstone and will receive support in the form of Marc Basseng.”

Nick Catsburg, ROWE RACING #98 BMW M6 GT3: “The Nordschleife is for me by far the nicest racetrack in the world. It is so easy to make a mistake and you are off. This makes it a very intense track to race at. That combined with the amazing atmosphere with all the fans around the track makes it such a cool experience to drive. Everyone always says this, but when you go out racing you can see the parties going on next to the track, you can smell the barbecues, you can feel the activity of the people around the track. That makes it extra special, even though the track itself is special. The aim for this race is definitely to win it. It’s clear that BMW is pushing very hard for this event. At ROWE RACING, I feel we have a very strong team and driver line-ups. And I think we should be able to fight for the win. That’s the goal. This weekend I will also be driving in the WTCC, so just like last year it will be a very, very busy weekend and a very important weekend for me as I’m now in P2 in the WTCC ranking so I can’t afford to lose focus there. I have to be at the top of my game and score points. This won’t be easy, but I like the challenge and I’m really looking forward to it.”

Markus Palttala, ROWE RACING #98 BMW M6 GT3: “After a positive preparation program, I feel that we are ready for the 24 hours. The BMW M6 GT3 is a great car around the Nordschleife and we were able to fine-tune the setup so that it’s comfortable and fast. Exactly what you need for this race, especially if we have mixed weather conditions as predicted. The competition is very hard as always, but we have an excellent package and I’m looking forward to the challenge.”

Richard Westbrook, ROWE RACING #98 BMW M6 GT3: “As always, I’m really excited to be back at the ‘ring. I have competed there since 2008 and it is one of the season highlights. In 2015, we came so close to winning and in the end fell short by just 40 seconds, so naturally the goal will be to go for a win. I feel this year the BMW M6 GT3 is well placed to challenge at the front, maybe last year was a bit early but now the car has a lot of mileage at the ‘ring and we feel we are ready. I’m really happy to be back with ROWE RACING, I’ve got great team-mates and friends in my car and with ROWE RACING’s experience with the M6 and the Nordschleife, we are starting on the right foot.”

Alexander Sims, ROWE RACING #98 and #99 BMW M6 GT3: “I’m really looking forward to the Nürburgring. It will be my fourth outing in the 24-hour race on the Nordschleife. And every time something new has happened. It won’t be a normal race, there will be plenty of challenges once again. Driving in two cars for the first time in my career is undoubtedly a new aspect of this race, and it will certainly be interesting. Ultimately when I get into the car I will do my job and it won’t be so important whether I’m in one car or the other. I will always give it my all. It goes without saying that the aim of the race is to win. We came fifth last year as first BMW car. I think in the BMW M6’s second year we can hopefully be just as strong, if not a little stronger in terms of our speed and hopefully we will be challenging for the win because that is the ultimate goal for ROWE RACING and BMW. The Nordschleife is unique in its challenges for a driver and the team. Being so long, as we experienced last year, you will quite often have very, very different conditions from one half of the track to the other. So, you have to try and predict the strategy correctly. Sometimes you are forced to take quite big risks and sometimes you have to play it safe. You try and judge it all the time, sometimes on your own at the track, and sometimes with the support of the team members. It’s really, really challenging and very different to other normal circuits where we have 24 hour races.”

Maxime Martin, ROWE RACING #99 BMW M6 GT3: “The 24-hour race at the Nürburgring is one of the top racing events of the year. For BMW as a whole and for us as drivers. With all the traffic and the extremely long and demanding track, it is a huge challenge. It will be difficult once again this year, but everyone really looks forward to it. We have been so close to getting the 20th win for BMW so often. It would be great if it worked out this time. It goes without saying that the proximity to Belgium means I am hoping for lots of fans from my home country again. That always gives me that extra motivation – even though that isn’t really necessary at the Nordschleife. You are always highly motivated there.”

Philipp Eng, ROWE RACING #99 BMW M6 GT3: “I’m not only looking forward to being on the grid at the Nürburgring, but also to the smell of fries and sausages in the Brünnchen and Pflanzgarten sections! The atmosphere at the race is unique and every lap is ultimate fun. In some sections of the track it is almost as bright as day despite the darkness thanks to the fans‘ lights. At such a big race, it is definitely the win that counts; that is our main goal. But with the level of competition this year, it is extremely difficult to make a prediction, since in my view there are 30 cars fighting for the win.”

Marc Basseng, ROWE RACING #99 BMW M6 GT3: “It is a great honour for me to be allowed to represent BMW and ROWE RACING at the 24-hour race this year. It will be my 17th appearance, and to compete for BMW now makes me proud. At 38, I am one of the more experienced drivers, but I am delighted that they have placed their confidence in me. I am totally confident that we have a top car and a top team. I can say without hesitation that the professionalism at ROWE RACING is the highest I have ever experienced in my career, particularly at the Nordschleife. Everyone is firmly focussed on success and on preventing any incidents, as far as possible. Overall, BMW has a very strong driver line-up, but I feel our car has a little extra bonus. I am proud to be able to drive with this crew.”