Round Two of the Australian Sidecar Championship Launches at Morgan Park

Round Two of the Australian Sidecar Championship Launches at Morgan Park 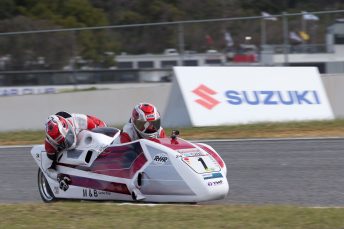 The Australian Sidecar Championship will again heat up at Morgan Park Raceway in Queensland, as competitors start to make their way from all corners of the country to compete for vital points this weekend. Motorcycling Australia (MA) recently caught up with rider Jero Joyce and Australian Sidecar Championship Coordinator and competitor, Jeff Brown to discuss the upcoming round two of four.

Featuring as part of the Yamaha Motor Finance Australian Superbike Championship presented by Motul Pirelli (ASBK) in select rounds this year, the Australian Sidecar Championship is developing a unique narrative of its own after recently holding its first round of the year at the third round of the ASBK at Winton Motor Raceway, putting on a show for spectators.

Revered sidecar F1 class competitor, Jero Joyce and passenger Corey Blackman have consistently found themselves on race podiums in previous years. Joyce shared his 2017 Round 1 Winton Motor Raceway experience and his predictions for the upcoming round at Morgan Park.

“We qualified on pole at Winton on the first day, but the rest of the field sped up and promptly overtook us! We are currently running second in the championship which is nice, but could have gone one better. The handling characteristics of the F2’s coupled with the tight corners at Winton, meant that the F2 class actually did better than F1. Morgan Park has a few fast corners that will allow the F1’s to pull away and gap the F2 outfits, so we hope for a better result there.

“Winton doesn’t really suit the way I ride, so I am satisfied with our second placing. Unlike Winton, the tracks I really enjoy the most are Eastern Creek and Phillip Island because of their long fast sweeping bends. There is no better feeling than passing on the outside of Turn 2 at ‘the Island’!

“Round two will see many more entries than the first round due to the geographic location of the event, as there are simply more sidecars in Queensland and we expect more than 19 entries. The teams to look out for is without question at Morgan Park is Howard Ford/ Lee Menzies who have serious speed and one of the best engines out there. Dave Bowen/Lok O’Kane also have pace and a home track advantage.

“Our preparation for most events is difficult because we live in Western Australia (Perth) and 99% of our racing is done interstate. The only way to go, is to have lots of friends from all over the country that understand what it takes to race a sidecar. That’s what it’s all about, we are all great mates and we help each other out where ever we can, especially with transport and parts. Its harder to transport sidecar and the equipment than regular motorcycles where you might fit four to a van or trailer. You can only get one sidecar, so there is a greater cost involved and greater complexity of logistics.

“Sidecar racing on track is all about being as precise as you can. There might be a full grid of wide body outfits racing around at top speed with only millimetres between them.

“I’ve been into sidecar forever, starting with speedway when my brother won a Western Australian State Title. Corey Blackman has been my passenger ever since he was 16, his mother even had to sign his license forms so that he could race! – He’s 40 something now so that was 20 something years ago!” Joyce surmised.

Australian Sidecar Championship Coordinator and competitor, Jeff Brown also shared his thoughts on the upcoming round. After becoming involved in sidecar racing since the very first day he was introduced to one in 2002 at a Leichhardt Motorcycle Club NSW ‘come and try’ day, Brown has a fair idea of all things tri-wheeled. He shared;

“We run as part of the ASBK this year for Rounds one at Winton, three at Eastern Creek and four at Phillip Island. Racing with the ASBK this year has been fantastic, because the whole show has grown and so too has the profile of our sport.

“Round two will be an interesting F2 showdown between Matthew McKinnon/ Peter Cummings and Richard Goodale / Scott Goodale. F2 Championship contenders will have a few less top competitors to worry about this round. John Clancy/Warren Grubb, Chrissy Clancy/Mick Alton will be over at the Isle of Man TT, but will be back for rounds three and four, finishing up the year. We are really looking forward to the next round hosted by the The Motorcycle Sportsmen of Qld Inc at Morgan Park. They run a great event and we have always had a large turn out to cheer us on.” According to Brown.

The second round at Morgan Park is sure to be an exciting affair as Sidecar riders cooperate with their passengers to achieve top results. Keep an eye out for further Australian Sidecar Championship news from MA as the year progresses.