Round Two action for Archerfield

Round Two action for Archerfield 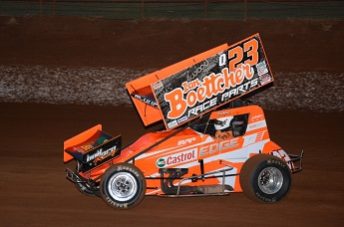 A huge line-up of more than 70 open wheel race cars will hit the track this Saturday night (October 7) at Ausdeck Patios Archerfield Speedway on a big program that includes round two of the East Coast Logistics Sprintcar Track Championship and round two of the Polar Ice Midget Track Championship, plus Compact Speedcars and the future stars of the Formula 500 Juniors.

Having lost his Sprintcar track championship to Luke Oldfield last season, Andrew Scheurle started his bid for reclaim the crown in the best possible way when he took out the opening round of the East Coast Logistics championship last month. In what was a fabulous start to the chase for Queensland’s premier Sprintcar series, Scheurele prevailed in a thrilling feature race, with Oldfield finishing second ahead of Mitchell Gee. All three will be in the thick of the action again this week, but look out for Lachlan McHugh on a redemption mission after a flat tyre robbed him of what seemed a certain victory in round one. The Gold Coast-based racer is tackling World Series Sprintcars later this season and a feature win or two at home would be a huge boost before he hits the road for his first ever WSS campaign.

Brent Kratzmann heads into the weekend as the most recent feature race winner in the field, claiming his maiden victory in Toowoomba two weeks ago and, whilst such a result at Archerfield poses a much bigger challenge, Kratzmann should be brimming with confidence. In addition to his on-track exploits, Kratzmann is a strong supporter of the category and back-to-back wins would be a worthy reward for his commitment and perseverance. Peter Lack is another who brings strong form into the event, finishing fifth in the season-opener and then snaring third spot behind Kratzmann and Oldfield in Toowoomba, with Scheuerle fourth on that occasion. A top five finish in round one puts Callum Walker very much in the frame, while fellow young guns in Cody Maroske and Jayden Peacock are also poised to secure a place on the podium.

In addition to the East Coast Logistics Track Championship round, the night will also feature the inaugural outing for the Sprintcar Development Series. To be staged over 10 events throughout the season, the Sprintcars Queensland Development Series is aimed at encouraging new drivers into the sport and providing them with racing opportunities as they develop their skills.

After a slow start to the season with a small field for the opening round of their Polar Ice Track Championship, the Midgets have produced a much stronger line-up for their second outing, with opening round winner Darren Vine no doubt relishing the challenge that comes with proven front runners in Scott Doyle, Troy Ware and Anthony Chaffey joining the field. After striking trouble early in the night, Adam Wallis bounced back to finish second in the opening round, while defending series champion Rusty Whittaker made a very early exit with a lack of oil pressure and will be primed for maximum attack to minimise the points deficit incurred as a result of his setback. Third and fourth in the series opener, Michael Harders and Mark George are both Queensland championship winners and are therefore expected to again feature amongst the leaders throughout the night.

Compact Speedcars continue to produce solid numbers and 19 racers will face the starter this Saturday night, including last start feature winner Dave Collins. Challenging Collins will be Wayne Corbett, Trent Usher and Jim Kennedy, all of whom finished inside the top five in their opening event of the season, with the likes of Riki Harrison, Richard Treanor and Jayden Mathers also contenders for feature race honours.