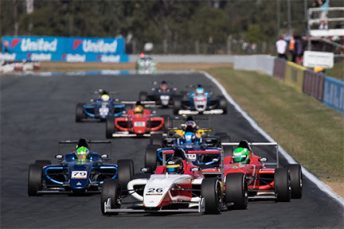 Affectionately dubbed ‘The Paperclip’, Queensland Raceway is set for plenty of action as the battle for the Championship heats up. New Zealander Liam Lawson (Team BRM) currently leads by just one point over West Australian Nick Rowe (AGI Sport).

It was a fiercely contested Round Four meeting at Phillip Island in May, as Victorian Simon Fallon (Team BRM) claimed his first ever round victory in his Australian Formula 4 career. Fellow CAMS Foundation Rising Stars Ryan Suhle (Zagame Autosport) and Cameron Shields (Team BRM) joined Fallon on the Phillip Island podium.

Fallon will be looking to notch up back-to-back wins as attention turns to Ipswich.

“I’m really keen to jump back into the car after the long break, but pretty keen to get the season back underway,” Fallon said.

“The track at Queensland Raceway is pretty fun but unfortunately it is a very hard track to overtake, so qualifying will be key.”

Shields is only 29 points off Championship leader Lawson, with Suhle a further 67 points behind. Suhle has a substantial lead in the Burson Auto Parts Rookie of the Year standings, with 54 points covering he and his nearest contender Aaron Love.

“It’s great to be leading the Burson Auto Parts rookie class, which was my goal coming into this season,” Suhle said.

“I really feel with three rounds left, we have all the pieces of the puzzle to challenge for wins and possibly the outright championship, which is super exciting for me.”

AGI Sport’s Sage Murdoch enjoyed a competitive round at Phillip Island, however a flip in the third and final race saw critical championship points slip away.

Aiming to overturn his luck, Murdoch has retired his #44 plate and will become the first Australian Formula 4 driver to race with the Championship’s namesake, #4.

“I have decided to start fresh with my race number, and hopefully it’s a lucky number as well,” Murdoch said.

“I’m hoping for a podium finish at Queensland to make up for all of the races I did not finish in and to help my point score for the championship.”

Practice Two, Qualifying and all three races will be televised live on Fox Sports 506 as part of the Virgin Australia Supercars Championship coverage.

Championship points (After Round 4)