Rough rollercoaster ride for Menezes in the Ardennes

Rough rollercoaster ride for Menezes in the Ardennes 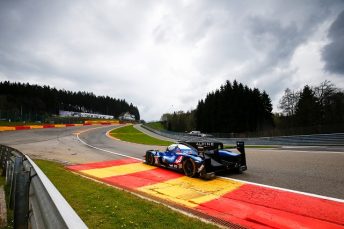 Belgium’s legendary Circuit de Spa-Francorchamps is renowned as something of a high-speed rollercoaster ride, and Gustavo Menezes certainly experienced all of its highs and lows on a challenging weekend for Signatech Alpine Matmut in the fiercely-disputed FIA World Endurance Championship.

After proving to be on the pace but out-of-luck in the Silverstone curtain-raiser three weeks earlier – leading the way in the LMP2 class until an ill-timed safety car intervention dropped the N°36 entry down the order to an eventual fourth-place finish – the talented young American headed for Spa with his sights set on opening his victory account for 2017.

Menezes worked hard throughout practice alongside team-mates Matt Rao and Romain Dumas – the latter standing in for Nicolas Lapierre following his countryman’s LMP1 call-up. He underscored his ability by posting the fastest lap time amongst the six Alpine drivers in each of the first two sessions, including setting the outright LMP2 benchmark during FP1 in endurance racing’s premier global series.

The highly-rated Santa Monica, California native subsequently teamed up with Rao to clinch second spot on the grid in qualifying – a scant 0.023s shy of pole position in a remarkably close battle – but after the lights went out to get the 6 Hours of Spa-Francorchamps underway, the N°36 crew’s weekend began to unravel.

Dumas initially held station, but contact from behind towards the end of the first hour knocked the 600bhp Alpine A470 prototype off-piste and down to fourth place. Worse was to follow, as excessive tyre degradation – most notably on a full fuel load – and a traction control issue prompted an extra, unscheduled pit-stop and sent Menezes, Dumas and Rao tumbling towards the tail of the 11-strong LMP2 field.

A switch to a harder tyre compound and a set-up adjustment for the second half of the race allowed the fightback to start, although by then, too much ground had been conceded to be able to target a podium finish – and to add insult to injury, a tap from an LMP1 Porsche in the closing stages was the catalyst for a further delay.

On the positive side, Menezes completed a competitive triple stint and fifth place at the chequered flag leaves him sitting fourth in the FIA Endurance Trophy for LMP2 Drivers ahead of what he calls ‘the big one’ – the celebrated Le Mans 24 Hours next month. As he bids to successfully defend his 2016 triumph in what is commonly regarded as the toughest race in the world, the 22-year-old Williams-Harfield Sports Group protégé is in determined mood.

“Spa was tough,” he candidly reflected, “but it’s always a fantastic place to race and irrespective of the final outcome and everything else that went on, I genuinely enjoyed every lap. We worked hard to refine the Alpine A470 in practice, and that paid off as we came extremely close to pinching pole position. Qualifying is my favourite part of the weekend because it really is ‘balls to the wall’ – and at Spa in particular, it’s a truly magical experience. It was good to see that we were right in the ballpark and as a team we did a great job, with the sister car up there in third place too.

“Unfortunately, the race was a different story. We struggled a lot with tyre degradation early on, which was greater than we had anticipated. Grip was non-existent at times, but we altered the pressures for the second half in an effort to counter that and our pace improved dramatically – to the extent where we were matching the class leader – so that went to show what might have been.

“Ultimately, we lost far too much ground at the start and that cost us, and by the time we had found a solution, we were too far behind to salvage a good result. Still, we never gave up despite the persistent problems, and setbacks like this only make us hungrier than ever to get back to winning ways. By the same token, our difficult start to the season will merely motivate us to work even harder.

“It’s the big one next – Le Mans – so we need to regroup and make sure we are absolutely on top of our game when we go there in June, because it’s a race that famously takes no prisoners. Like at Silverstone, the result at Spa didn’t remotely do justice to our pace or potential but we’re continuing to take steps forward and whilst we’re clearly not ready for Le Mans quite yet, I’m very confident we will be.”