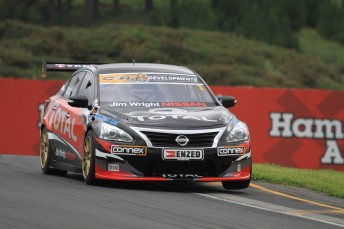 Defending NZV8 Touring Cars TLX champion Nick Ross will be aiming to win round two at Pukekohe Park Raceway this weekend and be the first man to take a V8 powered Nissan Altima to an overall round victory in the series.

After driving a Holden Commodore to an overall victory in April earlier this year he has taken the risky move of jumping into the brand new Total Lubricants Nissan Altima for this season.

The Cambridge driver believes after how extraordinarily well the car performed at round one at Hampton Downs earlier this month there is every reason to believe the goal is achievable.

“The car was quick at Hampton Downs so if we can take that speed to Pukekohe then we should have a good weekend.” he said.

Ross initially took two race wins at the opening round earlier this month but was given a time penalty in race two for briefly crossing a safety line.

However he still came away from the weekend with one race win and two second places which put him in second place on the points table behind Australia’s Jason Bargwanna and ahead of Lance Hughes in third.

This weekend at Pukekohe promises more of the usual excitement from the V8 powered field and is the second round of six in the series which will see the NZV8 Touring Cars TLX and TL Goldstar Championship visit Ruapuna, Teretonga and Manfeild with the final held at the V8 Supercars event in Pukekohe April 24­26.

series in a nail biting final race of the season taking the title after an incredibly tough, season­ long battle with Bargwanna.

“I’m very much looking forward to this weekend. The new car has been very impressive straight out of the box so the team and our sponsors are very happy with how it performs and just how great it looks.” said Ross.

The Nissan Altima shares the same chassis and gearbox as the other TLX cars on the grid but has it’s own unique panels and aerodynamic properties which needed to be made both compatible and competitive.

The car is mostly unique however in it’s being powered by a 5.6 litre quadcam Nissan VK56DE V8 engine which not only requires a slightly different driving style from Ross but delivers it’s own amazing tone as it roars around the circuit.

The two tier NZV8 Touring Cars TLX and TL Goldstar Championship gets underway with practice, qualifying and race one this Saturday 29th followed by race two and three on Sunday 30th.

The series will take a break over Christmas followed by two rounds in the South Island kicking off with a return of the series to Ruapuna Raceway just south of Christchurch on January 17­-18.