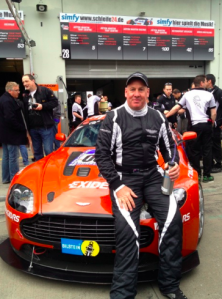 Rose will drive with the Aston Martin Test Centre team for the third successive year. Prior to 2012, Rose competed in the twice-around-the-clock marathon in his own cars, debuting in 2004 aboard a Mitsubishi Mirage Cup Car.

Rose has notched up four class podiums, and finished every race bar one. He says the Nurburgring 24 Hour is the pinnacle of endurance racing anywhere in the world.

“The Nurburgring is a phenomenal circuit; a lap of the track is 26 kilometres and there are 186 corners,” Rose said.

“Every year, the race attracts over 200 entries and there is a massive diversity in speed between the fastest and the slowest cars, so experience is critical in being able to stay out of trouble.”

Rose, by far the most experienced Australian driver in the event, says international endurance races became very attractive about a decade ago, due to the changing local landscape.

“After about 2002, there were no major endurance races in Australia for people like me,” Rose said.

“Privateers were no longer allowed to run in the Bathurst 1000, the Bathurst 24 hour only lasted two years and at that stage there were no Winton or Wakefield 300s either.

“So I decided to travel overseas and race on some of the world’s most famous tracks, first in my Mirage Cup Cars and then in the Holden V8 Supercars.

“I was the first person to run a Holden at the Nurburgring in 2006, and I also ran my cars at Spa Francorchamps in Begium, the Dubai Autodrome and Sepang in Malaysia.

“Apart from our F1 stars, no other Aussie driver has raced at so many overseas tracks, and I’m looking forward to continuing the trend this year.”

Rose’s co-drivers and exact model of Aston Martin he will be driving will be confirmed in the coming weeks.