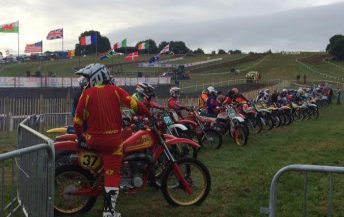 Rosco Holden of ‘Holden On Tight’ is pleased to announce the Australian Veteran Motocross des Nation (VMXdN) Team of 2017, ahead of the iconic race held at the United Kingdom’s Farleigh Castle Motocross Track, on September 15-17, 2017.

VMXdN is one of the largest, ‘Twin Shock’, ‘Evo’ and ‘Super’ class events globally, boasting well over 600 entries, with countries from all over the world represented. The unique meeting is run against the stunning backdrop of the medieval Farleigh Hungerford Castle built in 1377, near Bath in Somerset, England.

Holden attended the 2016 VMXdN as a guest of event organiser David King, marking 27 years since he last visited the Motocross MX 500cc GP (1989), assisting Rob Scott and Jeff Leisk. Upon his return to Australia, Holden set about assembling his 2017 ‘dream team’ to embark on a trip of a lifetime.

Holden is humbled by the amount of generous support for the 2017 VMXdN Team stating; “A brand new shipping container for all our precious vintage bikes and gear was generously supplied by a passionate sponsor, NRP Group, and again was helped with a generous donation towards transportation costs by Gas Weld Industries. The container will leave the Port of Brisbane in early July.

“A venture like this one requires everyone’s input. I really wanted to put a fabulous group of talented individuals and companies together, and absolutely everyone has pitched in! Starting with support from Motorcycling Australia and our brand new ‘Aussie Fighting Kangaroo BROO-Tus’ logo from Slootz Designs, Team Clothing from TeeM8 and Jersey’s Bolteverywear, graphics from Sixty Nine Designs and helmet design by Brownsgrafix. It’s a real team effort.

“We are also glad to announce that the 2017 International Six Day Enduro (ISDE) Vintage Enduro Trophy Australia Team heading to Brive in France (28 August – 02 September), will don the team clothing from the 2017 VMXdN. Team clothing will be available for purchase by the public online.

“There is a large group of family, friends and personal sponsors extending the UK visit and staying on to check out the modern Motocross Of Nations (MOXN) billed as the “Olympics of Motocross”, at Matterly Basin on September 28 (two weeks later)” Holden finished.

1. Russell Williamson: “I have represented Australia at the VMXDN at Farleigh Castle in 2010, 2011 and 2012 and raced on famous GP tracks against all my heroes. It’s great to return to racing and competing with all my friends, it’s a dream come true. Racing on a phenomenal track, on my own bike, and with a top bunch of teammates and supporters, it’s going to be great. None of which wouldn’t have happened without all the work put in by Rosco Holden and his helpers can’t wait
It’s going to be Epic!”

2. Geoff Ballard: “Really excited to be returning to Farleigh, but devastated to be now out of the over 50’s. Last time at the event, I came from an average start and won the first moto! I encountered technical difficulties in the second and third moto’s, but I’m looking to rectify that this time.”

3. Kenneth Swan: “I was lucky enough to be living in Hong Kong when I began racing, and was included in teams racing at ‘International’s’ in the Philippines & Guam. Returned to Australia in ’78, worked my way up to A-Grade and spent a number of years racing ‘Opens’ up and down the East Coast of Australia. I’m very involved in VMX racing in Australia and enjoy the camaraderie of VMX, that it brings the enjoyment back to racing and reminds us why we started riding dirt bikes in the first place, to have fun!”

4. Brad van Barrelo: “VMX has taken me racing all over Australia, New Zealand and to Farleigh Castle in 2010. Best of all, I’ve met so many like-minded people that I now call my friends the world over. You don’t do that sitting on the couch on the weekend watching footy! Farleigh 2017- Trip of a lifetime! Bring it on!”

5. John Kittle: “After racing the VMX des Nations in 2010 at Farleigh Castle I’m very excited to be going back to such an awesome event with a very good team of riders, great friends and family. It’s an honour to be representing Australia in the Twinshock class and I’m very thankful to Rosco Holden and the others who have helped put this trip together, with the added bonus of taking our own bikes this time. Looking forward to September at what has become the world’s biggest VMX race and catching up with great friends made at the previous VMXdN.”

1. Craig Anderson: “I have been fortunate to represent Australia five times at MXDN. It’s the biggest buzz and honour as a professional athlete. This journey makes six, and I can tell you it’s just as amazing each time. It’s all down to Rosco Holden’s dedication, commitment and love of the sport. The team is made up of great bunch of guys and true legends of our sport. The fact my wife, Katrina and kids Tatum and Trey will share this experience with us, makes it even better.”

2. Glen Bell: “Having competed many times at the Motocross des nations for Australia it is with great pleasure and pride to be asked to ride the VMXdN. The VMXdN has always been on the bucket list and with the help of Rosco to put such a talented team together that I have known almost my entire racing career. I now have the opportunity to race on the famed Farleigh castle motocross track an experience I will cherish for a lifetime.”

3. Kirk Hutton: “I’m always excited to represent my country, as it’s the greatest honour one can have. I’m very grateful for this opportunity to be a part of such an awesome team and to compete at one of the best venues in the world for motorcycling! Thank you to everyone who is making it possible for us!”

4. James Deakin: “I’m excited to race on hallowed ground like Farleigh Castle. Riding with a great bunch of mates, in the famous green and gold representing our country and hanging out with cool likeminded Aussies. Just having the opportunity to experience this adventure thanks to a small group of talented and well-organised people to which I say a big “thank you!””

5. Dave King: “Going on this trip reminds me of 2010 at the event, being a barman and dishing out free cider after racing on the Sunday night to my Aussie mates, I can’t wait to see them all again!”

Holden will be dedicating the return to Farleigh to the memory of his mum, ‘Babs’ on the anniversary of her passing.

The team welcome’s any individuals and businesses who might like to join as a sponsor towards the their 2017 efforts and to get involved. All who come on board would have their logo included in all team clothing and press, there is a time limit due to the printing of merchandise, so please send your enquiries asap to [email protected]