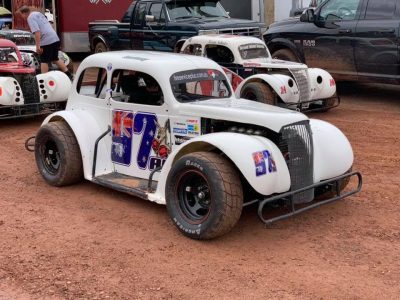 Returning recently from an America racing trip, which saw him turn his first laps on American soil at BAPS Motor Speedway in Pennsylvania, youngster Sean Rooney gained some invaluable experience while contesting the 22nd running of the US Dirt Legend Car Nationals.

Having made the decision to pursue his American racing debut following an agreement with North Dakota-based car owner Tim Brockhouse to lease his Legend Car for the event, Rooney, aged 21, was excited to go up against the best Legend Car racers in the world, hoping to pick up as much experience as possible.

Representing his country strongly, Rooney managed to qualify directly into the A main for the Semi Pro class in which he was competing, starting out of position 18 and eventually making his way forward to finish 16th.

“I can’t thank Tim (Brockhouse) enough for allowing me to race his car, along with everyone who helped to give me this amazing opportunity to race internationally for the first time,” the Northmead, NSW-based racer expressed.

“Racing in America was a completely new adventure for me and the level of competition was definitely tough, but just being able to participate in what is considered the biggest event for Legend Cars in the world was a really great experience.

“My aim was to qualify for the A main and I managed to achieve that, so I’m really happy with how the whole trip turned out. Aside from the actual racing, I also managed to make some new friends and build some new contacts.”

With Thursday’s scheduled practice session being rained out, Rooney and his team returned to the track on Friday, squeezing in an early practice before completing hot laps, which resulted in him recording the 24th fastest lap.

Making up one position during heat-race one, Rooney was running comfortably in fifth for most of the race before a mistake coming out of turn two caused him to slip back to his original starting position, placing sixth. Getting the jump off the starting line in heat-race two, Rooney took control of the lead for the first lap and a half until he became involved in a fierce battle for position with his rivals, ultimately coming home in fifth.

Following his 2018-19 season in Australia, Rooney hopes to return to America in April, this time for a three to six-month stint, where he is looking to pilot the Brockhouse-owned Legend Car to compete in speedway, as well as trying his hand at some oval track racing and asphalt racing.

Rooney would like to thank everyone for their support of his American racing trip: Tim Brockhouse, Doug and Baiden, USA Legend Cars, BAPS Motor Speedway, Glenn and Jo Mitchell from Picton Hire, Sam and the team from Legend Cars Australia, his mum and dad Karen and Steve and his sister Bella.

The next Legend Car racing outing for Rooney will be at Sydney’s Valvoline Raceway on the Saturday night of November 3.