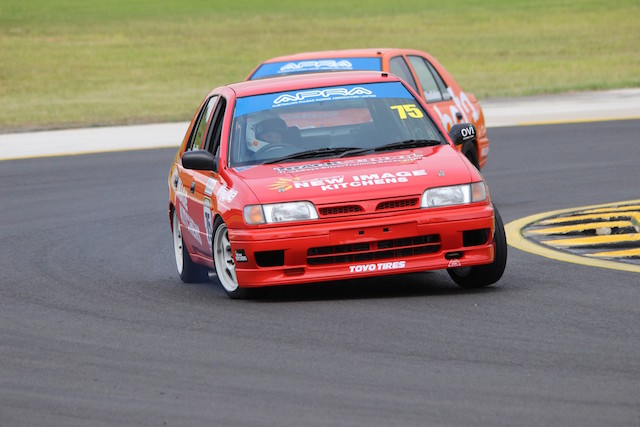 MEDIA RELEASE: Round 1 of the inaugural NSW Australian Pulsar Racing Association Championship got underway at Sydney Motorsport Park on Sunday 21 February with an impressive 29 cars entered.

The category has seen phenomenal growth in the past few months since incorporating as a company and is enjoying the fruits of being recognised a genuine cost effective grass roots motor sport category.

The field was blitzed by reigning champion Dimitri Agathos of Fullgas Racing in qualifying, who had a commanding 1.7 second margin to next best qualifier Jerome Pirozzi.

The Fullgas team has put in many hours of preparation and development over the summer break and both the car and driver clearly reaped the rewards of their efforts in the off season.

Jerome got off to a lightning start and challenged Dimitri for the lead many times, but a rare mistake at the top of the circuit put him out of contention and he settled for sixth, whilst Ryan, Boylan and Alexander rounded out the top four.

Of note, Matt Boylan set a new race lap record in obtaining his top 3 finish in his first race with his N15 Pulsar.

Race two saw a return to a standing start with Sean Ryan getting the jump on Phil Alexander, however by lap 3, Phil had found a way past and was never headed.

A serious accident involving Josh Heath finding a wall caused a minor delay to proceedings, however upon resumption of racing the series rookie Daniel Smith from the Trackshool racing team stormed from seventh on the grid to take a commendable second in a car that remained untested before qualifying.

Pirozzi, Smith and Agathos in the final laps were three abreast down the main straight in the contest for second, with Pirozzi snatching third from Agathos over the line.

Race three got off to a flying start with Daniel Smith taking an early commanding lead from the lights, with a three second gap after lap one and didn’t look to be contested, however an accident between turn one and two saw a stop to the race after Matt Boylan had a spin at turn one with Max Healy clipping the car and rolling onto his roof.

On the restart, Daniel Smith resumed in the lead, but another incident involving young flyer Tyra Maranik put a stop to the race which concluded the event.

The top ten running results at the red flag were Daniel Smith, Dimitri Agathos, Phil Alexander, Jerome Pirozzi, Matt MacKeldon, Greg Wood, Matt Dickey, Gene Alexander, Sean Ryan and Alexandra Lawrence, however due to damage to the Maranik car and the time needed to recover the vehicle, the race was abandoned.