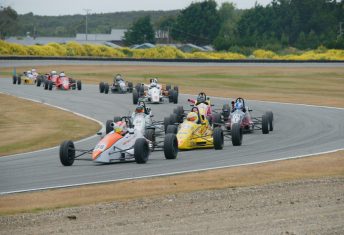 Rookie Christchurch driver Bailey Paterson has emerged as the new leader of the 2017/18 South Island Formula 1600 Championship at the halfway point of the season. At the third round of the series held over the weekend at Teretonga Park, Invercargill, Paterson finished on the podium three times including taking his second race win of the season. Second for the round showing consistent form was Kurt Peterson with Robert Toshach third, in an older Class 2 car.

“It was a great weekend,” commented Paterson. “We had some luck bouncing back from some disappointment at Timaru (Round 2). I’m thrilled to have the lead but with three rounds to go, anything can happen.”

Jordan Michels went into the weekend leading the round from Paterson with fellow Southlander Ethan Anderson in third. These three drivers took the top three podium positions in the first two races but a coming together between Michels and Anderson in the final race saw both not finishing and dropping points to their rival competitors.

“Points were looking good until race 3,” commented Michels. “We got pole position (in qualifying) which was great reward but things went downhill in race three.

“There’s a bolt that connects the steering to the upright which broke and unfortunately for Ethan (Anderson) he was right beside me and we both went into the gravel trap ending our race. It was one of those weekends you would rather forget.”

Anderson’s win in the second race came on top of his second placing behind Paterson in race 1.

“The round went very well,” said Anderson. “The car was ‘on-fire’ so really happy with the speed for the weekend. Not finishing the third race hasn’t helped but lots of positives for the team from the weekend.”

Finishing runner up for the round has been just reward for Kurt Peterson who now lies fifth overall behind Toshach. The Auckland driver has returned to the category after an absence of nine years and has been the steady improver over the nine races completed so far.

In the Historic Class 3 category, rookie driver Matt Butchart won the round from Joseph Oliver but is still lying second overall, just 10 points behind the latter.

Drivers and teams now take a break over Christmas before the fourth and fifth rounds in January over consecutive weekends supporting the 2018 Toyota Racing Series. Christchurch hosts its second round of the season 12-14 January with drivers returning to Teretonga a week later. Both events also double as the second and third rounds of the New Zealand Formula 1600 Championship.