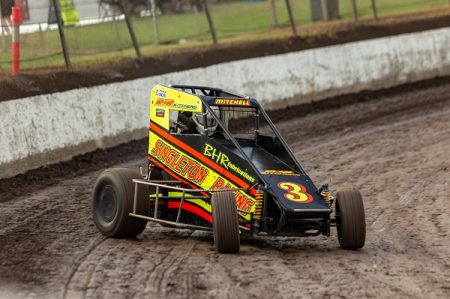 The 2018-19 season has been one of improvement for Mitchell Rooke, seeing him consistently hold his own against the best Speedcar drivers his home state of Queensland has to offer.

In only his second season in Speedcars after stepping into the class from Compact Speedcars, Rooke’s ability to challenge for top-five spots has resulted in him netting a runner-up finish in the final Polar Ice Series point standings at his home track: Brisbane’s Archerfield Speedway.

“It’s been a very good season for the team and I, and my confidence has definitely grown,” commented the 19-year-old racer from the Brisbane suburb of Kurwongbah, who finished fourth in last season’s Polar Ice Series point standings.

“The goal for the season was to just finish every race that we entered in order to gain more experience and that’s led to us being able to finish second in the Polar Ice Series points, which is an achievement that we’re really pleased with.”

Without question the season highlight performance for Rooke was when he narrowly missed out on a podium finish in the recent running of the 50 Lapper event at Archerfield Speedway, where he came home in fourth place behind three of the country’s leading Speedcar racers in former Australian Champions Kaidon Brown, Adam Clarke and Nathan Smee.

“The 50 Lapper is one of the state’s biggest Speedcar events and to be able to come away with such a strong result was a great boost for our small team and something we’re quite proud of,” he said.

“Full credit must go to my hard working team for providing me with a great car on the night, which enabled me to be so competitive against such a high calibre of drivers.”

“I can’t thank Rod enough for all of his support over the past two seasons and the opportunity he gave me to step into Speedcars,” Rooke praised.

“Rod has now become a good family friend and what we’ve managed to achieve over the past two seasons together has been well beyond all of our expectations.”

Next season, Rooke will enter his third season in Speedcars, campaigning another car in the form of the family owned Esslinger powered Spike car that was previously campaigned by Darren Vine.

“I’m looking forward to next season and seeing if I can build on this season’s performances,” he enthused.

“Apart from running in my home state, the plan is to venture out of the state and do a bit of travelling to gain more experience against different drivers on different tracks.”

Special thanks go to his mum and dad Janelle and Richard, Rod Singleton, his uncle Andrew, and his pit crew George and JP.