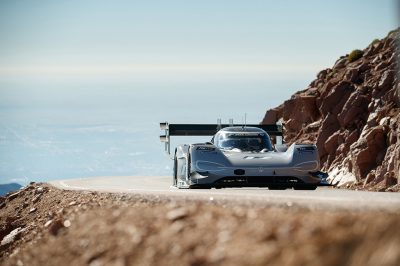 Prior to this year’s run, the French driver had won the world’s toughest hill climb on three occasions, in 2014, 2016 and 2017. Today’s competition saw him add a fourth victory to that list thanks to a record-breaking time of 7m57.148s, two days after posting a run of 3m16.083s in Friday’s qualifying session on an 8.3-kilometre portion of the 19.9-kilometre which provided an early glimpse of the Michelin-equipped electric car’s speed.

The event itself, which took place in perfect weather conditions, enabled Michelin to showcase the consistency of its tyres which allowed Dumas to benefit fully not only from the exceptional acceleration performance of his Volkswagen’s new electric motors but also from the exceptional grip of his tyres from the start all the way to the finish line. The Frenchman’s record-breaking run bettered the previous best for the course (8m13.878s) by more than 16 seconds.

Said Pascal Couasnon (Director, Michelin Motorsport): “I would like to congratulate our partners Romain Dumas and Volkswagen on this magnificent result. Pikes Peak is the world’s most prestigious and demanding hill climb and the new record they established today speaks volumes for the extraordinary progress that has been achieved in the field of electric vehicle technology. Michelin is delighted to have partnered not only Romain Dumas, who has now won Pikes Peak four times, and with whom we have won a long list of world-class endurance races, but also a carmaker of the calibre Volkswagen with whom we have secured four World Rally Championship Manufacturers’ crowns.”

The specific characteristics of Pikes Peak and the unique features of the Volkswagen I.D. R Pikes Peak, which include sophisticated aerodynamics, necessitated the development of specific tyres to in order transmit the exceptional traction delivered by the 680-horsepower powertrain to the ground via both front and rear axles. This in turn called for specific technologies both for the tyres’ construction and their tread compound. The constraints due to the weight of the batteries were also taken into account to make sure they were able to deliver peak performance from the start to the finish of the notoriously twisty Pikes Peak course. Another challenge faced by Michelin Motorsport’s engineers was to ensure that the car’s tyres got up to their ideal working temperature as quickly as possible after the start and, in keeping with the brand’s usual approach, they explored several innovative solutions prior to developing today’s winning tyres.

Michelin held the previous outright record for the Pikes Peak International Hill Climb which was posted by Sébastien Loeb and Peugeot Sport in 2013. The nine-time world rally champion effectively made history five years ago by completing the famous Colorado hill climb in 8m13.878s. Today, Romain Dumas, Volkswagen and Michelin used new technology to lower the benchmark further still and open a fresh chapter in the history of Pikes Peak with an all-electric car.