Rollercoaster of results for Hitech at Spa

Rollercoaster of results for Hitech at Spa 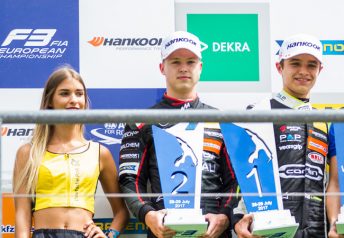 Deep in the Ardennes forest, sits the majestic sanctuary of speed, a thrilling rollercoaster of steep elevation changes, twists and turns that is respected by all who drive on it. The historic Belgian circuit of Spa-Francorchamps set the scene for 6th round of the FIA Formula 3 championship, providing a true challenge to the dynamic grid of young drivers. Bouncing off the back of a positive showing in Norisring, Hitech battled against disappointment to another hard-earned podium.

After some positive gains in a rain-soaked test day on Tuesday, the squad hit the track once more for a bumper day of track action on Thursday. In a change to the usual format for the championship, due to the supporting 24 hours of Spa, Thursday saw the FIA Formula 3 grid revved up for back-to-back practice and qualifying. With the typical Ardennes climate dampening the track for the early practice sessions, we were treated to a dry track for the first time as the lights went green for qualifying. The Hitech trio took advantage of the increased grip and showed their hand as Jake clinched P3, whilst Nikita put in his best qualifying result to start from P5, with Ralf just behind in P7.

As the lights went out, our tenacious trio went full power into La Source, eager to prove their worth at the historic circuit. Raising the speed down the Kemmel straight, Jake was confidently running in a podium position, until an ambitious first lap lunge left Ilott bouncing over the curbs at Les Combes. Eyebrows raised, our hearts leapt into our mouths as the Prema driver collected Jake, heartbreakingly breaking his suspension with his race ending before it really began. The team soon rallied around our Brummie wonder, who valiantly turned his focus on reversing his misfortune in the remaining races.

Back on track, our Russian rocket streamed around in 3rd place, eyes focused on claiming his first podium. Managing to take Günther on lap 7, Nikita punched in a stellar performance to cross the line in 2nd place. Followed home by Ralf, who narrowly missed out on the final points paying position.

Fresh from his first podium, Nikita gave us the lowdown:

“My maiden FIA Formula 3 European Championship podium finish was a long time coming, but now, I am very happy. In the opening stages, I just managed to avoid the accident with Callum and Jake and found myself in third place. Once I had overtaken Maximilian, I probably was a bit too eager and my tyres degraded. Now, we have to work to ensure that we are consistent front runners, but we are in a good way.”

Starting in 5th, 6th and 9th respectively for Race 2, the squad strapped in to tackle the relentless rollercoaster once more on Friday afternoon. Quick off the line, we engaged in battle as the tightly knit grid launched through the infamous Eau Rouge-Raidillon complex. It wasn’t long before contact sent the race into a disarray, avoiding the trouble Ralf managed to power into 3rd place. Benefiting from the slipstream on the straight, Jake clinched his team-mate, before hungrily setting after 2nd place. With a beautiful sweeping move around the outside of Hapsburg rising cheers on the pitwall, we were on for a tantalising tussle to the flag. At a track highly reliant on slipstream, Ralf tenaciously defended to maintain his position, but couldn’t halt the benefitting drivers from slipping by.

In a thrilling series of midfield battles, Jake and Nikita fought to pocket as many points as possible, Jake gave his all to finish just shy of the the podium. Whilst Nikita crossed the line just behind in 5th, a tangle with Schumacher saw him later demoted to 7th. With promising pace on our side, we looked ahead to the final race of the weekend, eager to hunt down more valuable points.

Back at the wheel on Saturday afternoon, we were treated to another close fight in Race Three, with our Hitech heroes right in the thick of the action. Rocketing up the steep ascent of Eau Rouge, Jake went wheel-to-wheel with championship leader Günther, leaving enough room as they pushed for the position onto the Kemmel straight. But misjudging his line, Günther closed the door, launching over Jake’s car and spearing himself into the wall. The spectacular shunt saw our British driver devastatingly retire from his second race of the event. Muscling his way round the 7km circuit, Ralf pulled his elbows out in a push for points, leading a tight chase in the midfield, holding off Hapsburg, Newey and Schumacher behind. Crossing the line in 7th, he brought home another points scoring finish for the team, whilst Nikita finished just shy of points in 11th.

In a weekend full of highs and lows, we dust ourselves off and look forward to building on lost opportunities when we hit the track at Zandvoort on 19-20th August, hungry as ever to fight for victory.