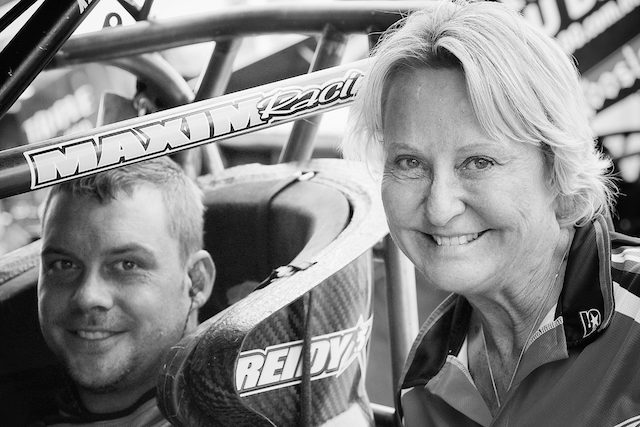 MEDIA RELEASE: The mother of famed Sprintcar driver Danny Reidy is set to be honoured as Grand Marshall of Toowoomba’s round of World Series Sprintcars on December 3, in light of her extensive contribution to the series between 2003 and 2011.

Angie Reidy boldly ventured on the road with World Series with her fresh faced 17 year old son Danny as a contracted driver in 2003 along with fellow Northern Territorian crew chief Dave McFadden, and spent the next eight summers touring the nation with the show, labelling the experience as the best years of her life.

“They truly were great years,” Angie says, openly sentimental about the many miles and smiles that forged lifelong friendships for the British born, New Zealand raised mother of two, who was introduced to the speedway world in Alice Springs, after she’d moved there as a backpacker in the late 1970’s.

“I have friendships today that were started when we were on World Series, many of which are my closest friends. In fact, the speedway community is so dear to me that I think if Danny stopped racing, I’d find someone else to put in the car, because speedway is where I feel at home.”

Now based on the Gold Coast, Angie has established herself as an astute businesswoman, but understands that not all investments are about a financial return.

“It was a wonderful investment in my family and friendships, but from a money point of view, there was definitely no financial return let me tell you,” she laughs, as she concedes that racing is possibly the most expensive hobby a family can have.

Former WSS commentator and series promoter Wade Aunger applauded the initiative to honour Angie, siting her as a major player in some of the series’ strongest years.

“She’s one of the first ladies of Sprintcars,” Aunger said without a doubt. “She’s very much behind the scenes and shuns the spotlight, but make no mistake, she’s a very astute business woman, and more than anything, she’s brutally honest and you always know where you stand with her.”

It was Aunger who nicknamed Danny “The Rockstar” partly because of his looks and persona, but mostly from his affinity with Ayers Rock, and his unmistakable Northern Territory dry humour and charm.

“I was privileged to watch Danny transition from a boy to a man during his time in World Series, and to watch how proud his mum is of him and how hard she worked to give him those opportunities. If speedway is a patchwork quilt, she’s one of the prettiest squares, and certainly one that cares the most about this sport in the whole nation, and I have enormous respect for her and what she’s achieved, both in business and in the sport.”

World Series organisers have deemed Angie’s extensive investment in the sport worthy of distinction, and as the tournament returns to Toowoomba’s Hi-Tec Oils Speedway on December 3 for the first time in six years, the lovable speedway mum will be presented with a plaque of appreciation, and will be on hand to call the A-Main field into the four-wide formation prior to the feature race.

For more details on World Series return to Toowoomba after a six year absence, check out WorldSeriesSprintcars.com, Toowoombaspeedway.com and the Hi-Tec Oils Speedway facebook page.